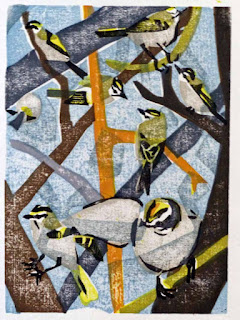 I'm sorry to say that Blogger just ate the 60-90 minutes worth of work I'd put into this post. I'm not going to try to reconstruct it. Perhaps Blogger is a dead technology. Or more likely it is just something  that Google has ignored Blogger for  years. It's always possible that the cause has nothing to do with Google but I think that's very unlikely. Certainly something like this should not happen. There should have been a draft version saved.  In any case this is my newest moku hanga print. It's about 6x8 inches excluding the 1 inch border. It is printed in a small edition of 10 on Shin Torinoko paper. Soon I'll print a larger edition on Nishinouchi paper. 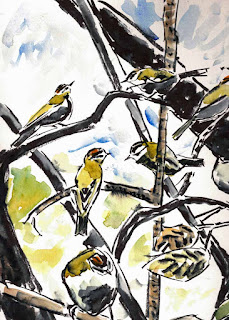 This print was based on this sumi brush pen and watercolor sketch of three years ago. I was never really happy with it but continued to think it had potential. I'd say that over 50% of  my most successful prints  have come from studies like this. Sometimes I use them immediately after making them and sometimes they sit around for years before I'm convinced I can use them successfully in a more developed  work. But almost always they have more appeal than working from photos  and they are more successful. 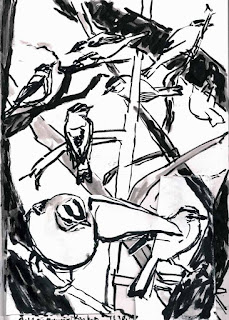 I can't recall the exact sequence but I think I copied the sumi brush pen sketch onto paper, reworked it, glued on some bits and pieces until I had a composition that I thought would work for a new print.  In any case this is pretty much the last sketch I did before starting the  print. 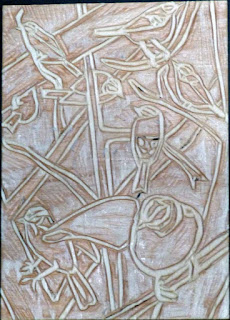 I then copied that sketch at a size that matched a block of Shina plywood I was carving and carved the keyblock, seen above. It always seems attractive to me at this point before it's been inked for the first time. Eventually I printed the numerous kyogo from it. They were then used as color guides for the remaining nine blocks that I used to come up with the finished print. One of them is shown below. 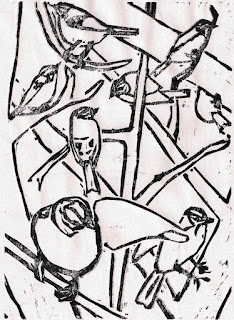 As I said at the start this post was originally much, much longer. But all of that was eaten by Blogger and the draft version had all of 2 letters left in it. So for better or worse I'm leaving it like this. It's not as loquacious but I hope will interest some readers as is. I should add that I'm quite happy with this print and with the growing comfort I'm finding in the process of moku hanga. Technically I continue  to  have great room for improvement. And I'd like to get better technically. But that is never my primary goal, in printmaking or any other medium.