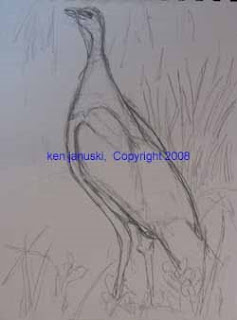 Over the last week I've been looking at the work of my favorite watercolor artist, Winslow Homer, in the book 'The Watercolors of Winslow Homer' by Miles Unger. Each time I do I'm reminded of just how good watercolors can be. Looking at the book, laid out in more or less chronological order, it's easy to see Homer's growth away from his drafting skills. Homer was a very accomplished draftsman and this is most obvious in his early work. Drawn shapes remain an armature on which to hang his paintings in his later work but they really are just that: an armature, with which great liberties can be taken. The introduction to the book mentions how watercolor can excel, especially in Homer's work, in capturing light and atmosphere. These are almost always present in Homer's watercolors. The introduction also mentions that Homer never shies away from letting the mistakes or other evidence of the work of finishing the work remain visible. I think it is the combination of light, atmosphere, and fearlessness about showing artistic process that make him so appealing to me. 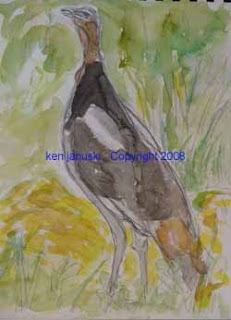 While working on two pastel drawings recently I found it refreshing to be able to be more carefree with them than I can be with the less familiar, and forgiving, medium of watercolor. But I had some misgivings about the health effects of breathing the fixatif needed to fix the pastel powder to the page. My online investigations only made me more concerned. So I decided to stop them for awhile and go back to watercolor. In preparation for that I took another look at the Homer book mentioned above. One thing that struck me was the rich, luminous but inexact washes that Homer would often use for part of the background. I thought I might be able to use this in my next watercolor. 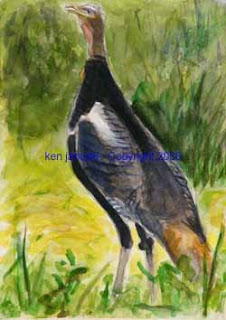 I and my wife have seen Wild Turkeys in three places in Philadelphia over the last 15 years or so: Tinicum, the Schuylkill Center, and Northwestern Ave. near Morris Arboretum. We spent three hours of a beautiful day with weather in the high 70s at Morris Arboretum today. We saw no turkeys, but did see a total of 28 birds, including a Solitary Sandpiper, Green Heron, Great Blue Heron, Great Egret, 20 or more Wood Ducks and at least 12 Cedar Waxwings. A Wild Turkey would have fit right in, but it wasn't to be today. We did see one at Tinicum taken Memorial Day weekend, 2008. A photo of it is the basis for the accompanying watercolor. 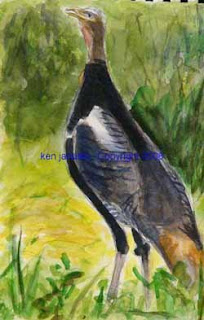 Though I had taken a number of photos of the turkey I've been holding off on trying to do a painting due to the iridescence of the wings. How was I ever going to get any sense of that? It wasn't of paramount importance but I also thought it couldn't be ignored. But watercolor, as evidenced in Winslow Homer, can create very rich coloristic effects. I'm not sure if the iridescence comes through in this photo but I think that it does in the original. I'm happy with it.

Watercolor is a medium that can turn from brilliant luminosity to MUD in a matter of seconds. I think it is a medium that is best used with a solid draftsmanlike armature underneath. But for me it is a crime to be ruled by the armature. It is there as a lifeboat, not as a prison. I think that this is how Homer used it. For myself I think that there's a great danger of MUD if I don't also have my own fairly detailed drawing to start. That anchor, which I know is always there, allows me the freedom to let the paint speak for itself. My artistic background tends strongly in this direction. But it is greatly helped by the example of Winslow Homer.

One last thing that I think draws me so much to Winslow Homer: his love of nature. I don't think he was probably a bird lover though. The few paintings I've seen that include birds aren't among my favorites. But birds can be intimidating. It's easy to feel that every feather should be rendered. Perhaps I'm reading too much into this, but it looks to me like Homer was a bit timid with birds and doesn't use the brash abstraction that he does with other parts of nature. He's somewhere in between his usual brash abstraction and a need to portray all the details of the bird.

Posted by Ken Januski at 3:14 PM No comments: