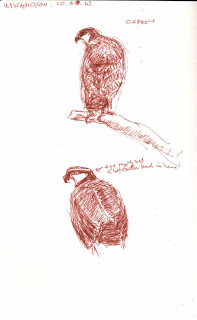 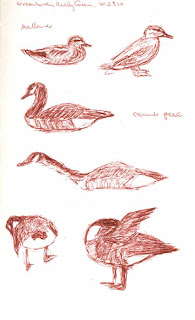 is to just sit still. I had to think of this today as I was talking to two friends and an Osprey came up quietly behind us, landed, and stayed at least 15 minutes as we continued our conversation. When they left I took up sketching him and he probably stayed for another ten minutes, always on the same branch.

It's amazing how often this happens. I'd seen very few birds in 90+ minutes of walking and almost all of them the Canada Geese and Mallards in the sketch above. Then we started talking and the Osprey appeared. A Sharp-shinned Hawk also quietly flew in and landed near us while we talked. Meanwhile a Turkey Vulture kept circling the Osprey, getting closer each time before finally drifting off.

In any case it just proves, to me anyway, that often the best way to bird is to just sit still and let the birds come to you. In the case of the Mallards and Canada Geese they are almost always there at Valley Green, primarily looking for free handouts I think. But there's something pleasant about just watching and sketching them and their world, especially on a day as beautiful as today.
Posted by Ken Januski at 3:17 PM

...I love to hunker down and be still--the birds really do come in, and I can study their behavior. Sometimes it's hard to that, though, because I always have an urge to walk "just a little further" to see what's there...

I'm sure experienced birders are torn between just sitting and trying 'just a bit further.' I'd be willing to bet most people just keep moving.

But I'm always very pleasantly surprised when I just sit still. Yesterday's example of the osprey was just too noticeable an example of the virtues of sitting still not to write about it. And you're right that's also the best way to learn behavior. Maybe at least for some of us there comes a time when a tick off the list is far less interesting than just learning more about a bird.

Even drawing the Canada Geese yesterday I realized that there was a world to explore with them. For awhile it all looked like they were having a contest as to who could throw his head most violently and deeply into the water. I guess I'll need to try a drawing of that next time.