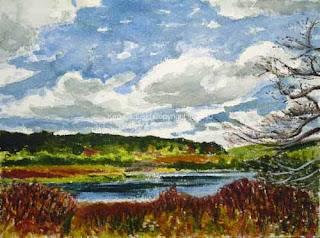 Our trip to Canaan Valley didn't bring us many birds, but it did bring beautiful weather, sunny skies, and a really magnificent setting. We visited Canaan Valley State Park, Dolly Sods Wilderness Area, punctuated by 100s of warblers at the banding station and a roadside Ruffed Grouse, and Canaan Valley NWR. Though we enjoyed each we probably most enjoyed our visits to the many tracts of the National Wildlife Refuge.

There are extensive high-altitude wetlands here, most connected in one way or another to the Blackwater River which flows through the valley. The scene above is based on a photo taken toward the end of the Camp 70 Road trail, as it looks over a beaver pond.

Most of the time we were there the clouds were magnificent and dominated everything we looked at. So when I took this photo, with a future painting in mind, I tilted the camera to get more sky than land.

I'm new to watercolor and really haven't studied its history as I have with other media. Still I think most people would say watercolor was just made for painting sky and clouds. Vegetation and foliage may be another story. But clouds and watercolors go together.

However they've never gone together in my paintings. I've rarely if ever done landscapes or cloudscapes. But these views were just irresistible. So I'm continuing to work with them.

Eventually I'll probably turn back to abstracting them. For now it's interesting to try to paint them as they appeared, at least in photos and my mind's eye, using the medium just made for them.
Posted by Ken Januski at 12:17 PM

Great sky and love the highlights on the water. You can really feel the atmosphere. I think the tree adds great interest entering in from the right.

Thanks Pam. It was such a striking sky that I took numerous photos thinking that they'd eventually end up in paintings, even if I hadn't done such paintings in 25 years if ever. Still when you see skies like that you want to paint them.

It took me awhile to get that tree to work. At first it just seemed too cut off. But I think it works now.

Saw Black-throated blue and Tennessee warblers in Hercules Club today so I imagine a painting of them is somewhere in the near future.

I'm glad you like this one. I do have to say that I love landscapes and that part of my enjoyment of seeing and drawing birds I'm sure comes from being outside. I of course am sure I could find plenty to draw and paint in the great scenes that you post from your hiking adventures.

Your photos also remind me a bit of my ancient days in California when I did some backpacking in Yosemite. The views from those granite mountains are something never to be forgotten. In fact that reminds me that there is an artist named Bill Cone in California who does some very nice pastels of such landscapes. Wish I had the sense to have tried drawing them when I was there!