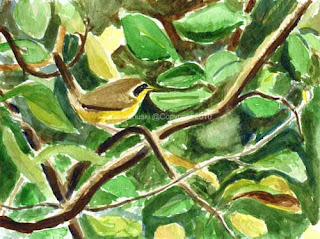 the whole forest suffers. I thought about this today while walking at Carpenter's Woods in Philadelphia. Last summer one of the huge old oaks fell, taking away one more of what seems to be the favorite tree of birds, certainly of migrating warblers. And of course it destroyed everything in its path.

Today I saw another huge one had fallen, again taking with it everything in its lengthy path. Young trees as well as old trees, perhaps even endangering a tree that probably was its own age. As I said when a huge old oak falls it does a lot of damage. The innocent suffer.

I can't help it today though. The fallen oak reminds me of the financial crisis and all the people who are still suffering in many ways from it. There is plenty of blame to go around for it, affecting both parties as well as the public, and always centered on greed. But most of the supposed causes, Fannie Mae, stupid and/or greedy home buyers, totally inept rating agencies, are all red herrings. The vast brunt of the blame comes back to just one place: the financial industry and its unbridled greed. And that greed found an outlet due to deregulation.

But the Obama administration is like the workers from Fairmount Park who will come in and try to clean up the mess. For whatever reason the Democrats seem unwilling to take credit for what they've done but they have in fact been the foresters who came in and cleaned up. And the answer for the future is a return to much stronger financial regulation.

And yet many people seem to blame the Obama administration rather than the financial industry which caused the problem in the first place. Though Democrats were also guilty in the rash of deregulation that took place over the last 20 or so years and led to this disaster they were small peanuts compared to the Republicans. And people want to let the deregulators back in, or even worse the Tea Parties who don't even seem to understand why regulation is necessary! You'd think the present crisis might have shed some light on this but in fact it's done the opposite. There is more and more call for deregulation. Remember deregulation caused the present crisis. A return to it will just precipitate another one.

Imagine if you ran a forest like that. You'd not only have to worry about cleaning up after fallen trees by yourself since there'd be no government agency to do so. You'd also have to worry about just about anyone coming in and cutting all the oaks down all on their own as part of their own libertarian, constitutional right. Perhaps they'd prefer to put up a circus and charge admission. Who would stop them? The fact is society, particularly one as large as ours, can't function without regulation.

If you're at all awake you've seen examples of regulation gone wrong. It can happen to anyone and often does. But in response I'd say this: have you ever seen a misapplied regulation that's caused the damage the removal of regulation from the financial industry has caused? I didn't think so. Underneath it there is no 'mortgage' crisis. The crisis is due to financial deregulation. It found its outlet through mortgages. In five years it will find something else. 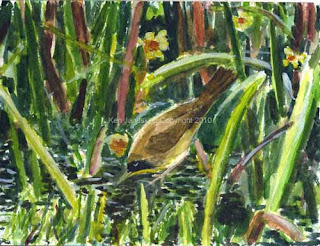 On a completely different tack: two different watercolor studies of Common Yellowthroats done over the last week. Well maybe not quite so different. I just wonder how much more endangered birds such as this will become if the Republicans gain control of the House or Senate. A crisis is always used as an excuse to plunder something. Adios Environment.
Posted by Ken Januski at 5:44 PM

Well it turned out about as I expected, sad to say. It's hard to know who I'm angrier at, Republicans for their lies, obstructionism and distortion, or the Democrats for just quietly accepting it and not fighting back.

The only good thing I think is that history never unfolds as you expect. So who knows what will happen next?