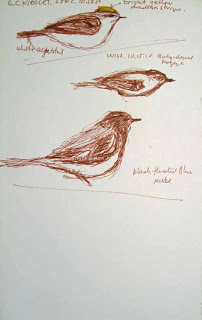 That would be kinglets and warblers, at least when you're trying to do field sketches of them. In my last post I mentioned how happy I was with my last two pastel drawings of the Orchard Orioles and the Black-throated Blue and Tennessee warblers. I still I am and plan to continue in that direction.

But I also want to continue working from life, getting better at drawing birds as I see them, even if it's only for a split second as is often the case with warblers and kinglets.

The drawing at top includes a Golden-crowned Kinglet, followed by a Ruby-crowned Kinglet and then a male Black-throated Blue Warbler. Since I didn't have a scope and the birds only sat still for a split second I looked at the birds, tried to 'burn the image onto my retina' and then look down and start drawing. This seems to be good for getting the general shape of a bird. But unless you're one of those people who can think 6 moves ahead in chess you run into trouble on move number two. Where do the noticeable markings go, for instance the obvious stripes in the head of the Golden-crowned Kinglet and the huge eye in the Ruby-crowned Kinglet? Where exactly are those black and white markings on the black-throated blue?

Well these are problems. In each of the sketches above I used my visual memory of other drawings and photos. As usual my memory was wrong. When I checked later I saw that once again I had both the wing position and the markings wrong on the kinglets. And I once again elongated the head of the Ruby-crowned Kinglet. I've made this same mistake in 90% of the Ruby-crowned Kinglet field sketches I've made! The Black-throated Blue is a bit better but that's partially because I held off on some markings until I could get home and check a reference. 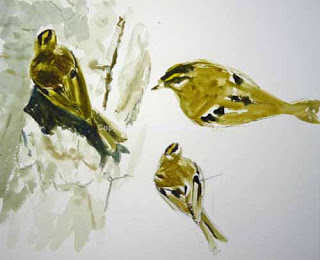 Why put myself through such torture? If I meet people when I'm out sketching their obvious comment is: why don't you just take photos and use them. It seems hopeless to try to explain the lack of connection that results in working from photos. Not to mention the added excitement of trying to draw what's right in front of you before it moves. That excitement comes out in field sketches I believe. It also teaches you to see.

One of the odd things that does happen in field sketching is that you put down your impression. In the watercolor above, which was based on some photos of a Golden-crowned Kinglet I took the other day, I tried to accentuate what I saw with my naked eye, rather than all that the photo showed me. Inevitably photos show you the edge of each primary, secondary, tertial feather. But you don't see the world this way. What I saw instead was a sleek oval with stripes on the head and a black and white arrow/chevron toward the back.

The arrow/chevron made no sense to me as I saw it? What was it? What part of the feathers created it? But the impression was most definitely there. When I checked the photos I saw it was a combination of a black mark and some edging on the flight feathers coupled with a slightly lighter color in those feathers. Since I had photos to work from I could have delineated each feather. But why? What I saw was the black and white arrow/chevron shape. So that's what I tried to accentuate.

This is the choice each artist must make since the advent of photography. Do you want to be true to photos or true to what you see. They are vastly different. 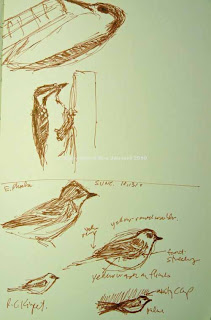 The last sketches above include a Red-bellied and Downy Woodpecker at a feeder. It also includes more warblers and kinglets, none very successful. These sketches are from a few days ago. The one at top is from today and yesterday. I think that they show I'm slowly improving with this. Hopefully I'll finally get a believable kinglet sketch before they're gone until next year.

By the way if you do want to see some beautiful photos of Golden-crowned Kinglets in tremendous detail you couldn't go wrong with this recent post from Corey at 10000birds. One of them shows the chevron that I mentioned.
Posted by Ken Januski at 6:26 PM