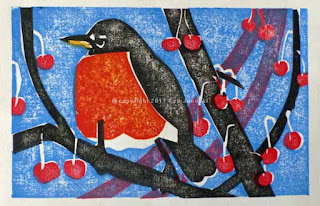 When I was a graduate student in Art Practice I used to feel sorry for a particular classmate of mine. He was very talented, primarily in a realistic manner, but he seemed always frozen in place because he thought too much about what he did. At least that was my view of the matter. I always  wanted to say to him: just paint, stop thinking!

And yet I now find myself  a bit  in the same situation. When I got to work on the newly finished print above I remembered how much I enjoyed printing, well at least now that I have a better idea about how to get consistent color than when I first started. But I think because printmaking is  a commitment of time, effort, paper and other materials I always want to have a good idea before I start. Thus the time between prints  drag into months and months, all while I wait for a 'good idea.' When I actually start a print I often ask myself why I didn't start earlier.

I could go on and on about this but I won't. Suffice it to say that I'm quite happy with the 6.5x10.5 inch moku hanga print above. I'm still printing it so I'm not sure how large the edition will be. It would be nice to have an edition of 100  or so but my guess is that it will be 30 at most. Now that all the excitement of getting a print I like is done it's not as easy to commit  to  the work of printing a large edition. We shall see. It also seems to put all of the creative work into it without getting the reward of a large, sellable edition.

Below you see the final proof before I actually started the print. The last block printed was the keyblock, which had outlines  of most  of  the shapes. I intended to follow the same procedure in the actual print. First I would  clean up each of the three color blocks, print then in solid, consistent color  rather than the uneven color below, and then print at least part of the keyblock. I thought I would experiment  a bit  and keep cutting down the number of lines I included until I had just the essential ones, enough to define the robin and make the print sing.

But a surprise happened. By the time  I got  to what you see above I loved the print as is. I couldn't imagine how any  lines would be helpful. I expected that they would just make the print  seem cluttered rather than fresh. So it's done!  One block short of where I thought  it would be. 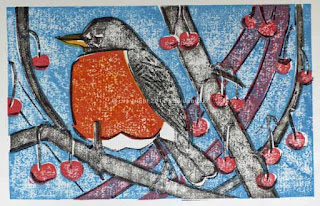 One final thought. I never liked all the solvents involved with oil-based printmaking. Eventually I  changed to water soluble oil-based inks. That was better. But due to limited studio space I had to carve the print on second floor in my studio, but print it two floors down, in the basement. There was still a lot of cleanup. And then in early 2017 I tried my first moku hanga print.

Now I do everything in my second floor studio, both carving and printing. Cleanup is almost non-existent because the paint is water-based. Though it's difficult to get reliable coverage of the colors I feel more confident about it  and this print is by far my most successful in that aspect. I'm starting to get the rich color that I've seen others get. And all in a very small studio space. You could almost say it's miraculous.
Posted by Ken Januski at 3:01 PM No comments: