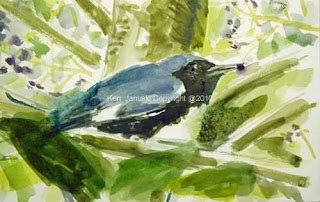 It's sometimes hard to convince people how important bird songs and calls are in identifying birds. I remember talking to a co-worker once, who supposedly knew about birds, who remarked that he thought learning calls and songs was for snobs. Real Birders SEE Birds. Well, not exactly.

If you know bird vocalizations you can spend time looking where you hear the unusual bird, and perhaps getting it in view in your binoculars, rather than chasing movement with your eyes only to find that you've just put your binoculars on robin number 42 for the day.

Today I really didn't need to know any vocalizations though. This time a Black-throated Blue warbler landed in front of me, then vocalized a loud 'Click' every time he moved amidst the Devil's Walkingstick. I'd put down my binoculars for my camera and was trying to shoot some photos. So having him constantly giving me vocal clues as to his whereabouts was tremendously helpful. Warblers don't tend to sit still. So you can bet that by the time you've focused your camera, binoculars or scope that they've probably moved.

This constant 'click', also described as 'dik' or 'thik' helped me find him each time he moved. It was also loud. That's one more pleasure of birding: learning the surprising aspects of birds. You wouldn't think such a small bird would be so loud. But it is.

The quick watercolor at top was done in 15-30 minutes, based on a photo I took. Like many of these quick watercolors that are intended mainly as blog illustrations I don't take a lot of care with them. They're really meant to illustrate a story/post. I've been trying to document all the birds that feed on Devil's Walkingstick, a plant that for some perverse reason is classified as an invasive by many. When I got a photo of him with a berry from that plant in his bill I just couldn't resist painting it.
Posted by Ken Januski at 5:21 PM