November Field Sketching in Cape May 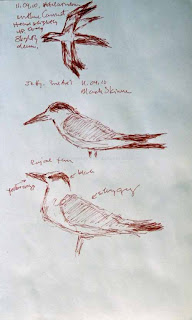 As regular readers of this blog surely realize I and my wife like to vacation in Cape May, NJ at least once a year. Though there are many attractions in Cape May we singlemindedly pursue just one: birding. The various habitats combined with its location at the tip of a peninsula on the Atlantic coast combine to make it a tremendous place to see quite a variety of birds.

So I include my own rough evidence of that. I say 'rough' because these sketches are just what I see while the bird is still there. I don't go home and finetune them in the studio. Not that I won't do later finished paintings. But with field sketching I try not to fix them up afterwards. Not that I never add something later. But normally not. So in the sketches below there is a Bufflehead that looks like almost nothing. But I won't do anything with it. What is here is honest and I'd like to keep it that way, knowing that this represents what I thought I saw.

At top is a Northern Gannet in flight, seen with a scope from our motel room window. Beneath him are a Black Skimmer and a Royal Tern. 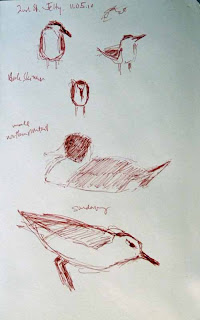 Above are more Black Skimmers, seen facing head on, where their bill seems to disappear, followed by a male Northern Pintail, and finally one of the ubiquitous Sanderlings, who constantly played tag with the incoming surf. 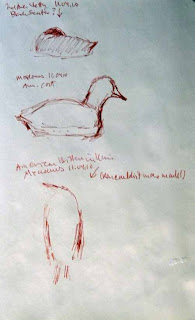 Now a Black Scoter, sitting off in the distance, followed by an American Coot, and finally an American Bittern posing in the rain. We had rain all day on one day. We are likely to see American Bitterns about once a year, generally in squawking flight going out of sight. But the rain seemed to have rendered this bird unafraid of people. He just sat out in the open. Just one problem though. I had a tremendous view but my pen would not make a mark on the paper. I tried two different pens and could only get what you see. The pens would just not work on the rain-spattered paper. I did get some photos though so something more developed may yet appear. Oddly enough we saw two bitterns one day and then a single one on two succeeding days. Only this one stood out and posed. 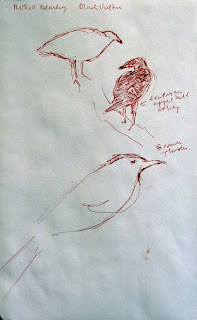 We don't see Black Vultures all that often and they are always in flight. But these sat quietly in some tree tops. Below a loud but rarely visible Brown Thrasher. 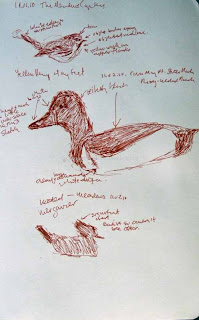 There comes a time when many birders get sick of seeing Yellow-rumped Warblers. They seem to be everywhere when you know that other warblers are also around. But you just can't find the one other warbler amidst the 100 Yellow-rumps. But still they are beautiful birds, in their more delicate fall colors as well as in their gaudy spring colors. This one was so close he walked across my shoe at one point as I tried to sketch him. Followed by a male Ring-Necked Duck and a distant female Hooded Merganser. 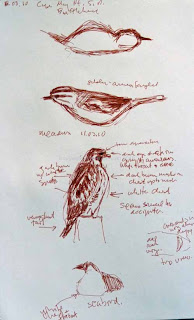 Finally just the hint of a Bufflehead, followed by a Golden-crowned Kinglet, one of many which were also so unafraid as to land at my feet as I sketched. Beneath him a bird that I sketched for ID purposes because I just didn't know what type of hawk it was. Finally, thanks partially to all the details I noticed while sketching, I determined it was a Red-shouldered Hawk. Finally beneath him a seabird that I just couldn't see well enough to ID.

AS I said these are rough. They are more evidence of things seen than finished sketches. But I think this sort of honest sketching is invaluable. I thought of this as I looked through the photos that I also took. I take them for reference, perhaps to see a detail that I missed in the sketch. But the photos always strike me as a bit lifeless. They can't capture the full three-dimensionality of the bird. And yet they can have such detail that they seem like they would be a good source for a painting. I don't believe that they are. For me I want to start my paintings or developed drawings based on field sketches. They seem to be a better talisman of the initial experience. They evoke it better. Then I may use photos to help with details.
Posted by Ken Januski at 12:21 PM