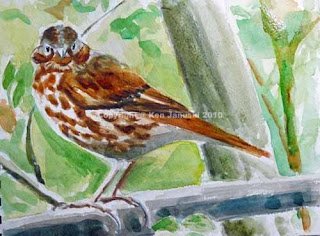 When we went to Cape May the first week of November it really wasn't when we wanted to go. We wanted to go earlier but circumstances prevented that. One consolation though was that I'd read that November was often the month of big surprises at Cape May, especially for West Coast migrants.

We didn't see any. However I had to think of it when a west coast warbler was reported just 7 miles away yesterday. Improbably it was also the first day for bird walks at the Cobbs Creek Community Environmental Center in Philadelphia. Who would have expected a Townsend's Warbler, on the first or the 10,000th walk?!

Still that's what it was and some great photos were taken. You can see how we might be tempted to go hunting for it, something we've never done before. We bird locally and on vacation but never make special trips to see just one bird. But this was too good to pass up.

Well I did see a bird with a face patch today, only eight feet off the ground, that others clearly identified as the Townsend's. Jerene got a couple of looks, not much better, but enough to piece together the bird. I brought my camera and sketchbook and was really hoping to do a field sketch. Not today though.

However yesterday we had another November surprise, a Fox Sparrow in our backyard. They are not exactly rare birds here. But I doubt that we see them more than once a year in Philadelphia. And we've never seen one in our yard.

He didn't stay long, and it was getting dark, so I didn't get any sketches. I did get a couple of quick photos though and did the quick watercolor at top based on one. It leaves a lot to be desired but at least serves as a record of our first ever Fox Sparrow.
Posted by Ken Januski at 5:24 PM