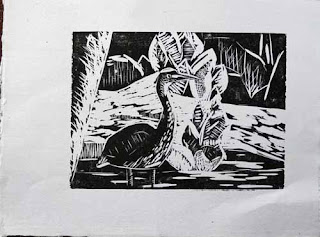 My newest foray into linoleum cuts, number three in my career, is at top. It is version number 11 and is pretty close to being the last version, if not actually being the finished version. 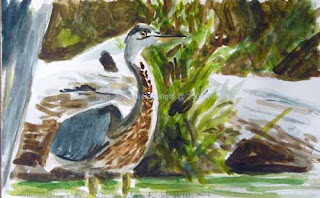 It's based on the watercolor above, based on a photo that I took at Morris Arboretum this summer. I know that there are plenty of more experienced lino printmakers on the web, many giving step by step narratives of their prints. But since this is my first one on good paper and went through a lot of steps I thought I'd show some of them here.

I began by scanning the watercolor, then reducing it in size to about that of the lino block. I then printed that and made an outline in chalk of the major shapes. I then rubbed this onto the lino block. Because linos print in reverse if I'd just drawn on the block while looking at the watercolor the end result would have been in reverse. I didn't want that so I used the process just detailed. 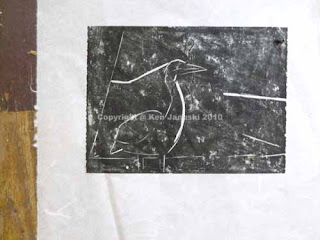 Once I had the chalk on the block I made a few cuts. But once lino is gone it is gone, just like wood or stone in sculpture. So I wanted to proceed cautiously. The very first version is above.

I then moved on developing various areas, and responding to what the various proofs looked like. 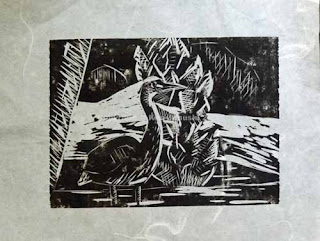 Above is version five. At this point I still intended to let the foliage next to the heron go to the top of the page. But as I experimented with various ways of hatching in order to get the sense of tones I made a mess. The area was just a jumble. So finally I decided to let the background fallen tree show through and divide the foliage into two shapes.

It took 6 more versions after that before the print seemed to come together. As I said previously I've been using some very old Japanese printmaking paper whose name I don't even know. It's been rolled up for years so has been difficult to use. But finally I ordered some good paper. The version at top is the first proof pulled on good Hosho paper.

Most likely I'll print an editon of 10 or so of these on the Hosho paper.
Posted by Ken Januski at 2:15 PM