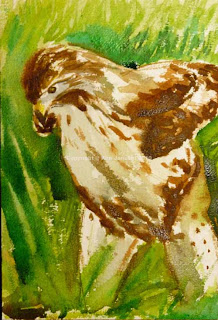 Thwak!! That was the sound the young Red-tailed Hawk made as it left its perch 10 feet above and in front of us and landed at our feet, less than 6 feet away. I assume that he thought he spotted something though as we watched and sketched him today at Morris Arboretum we never saw any sign of him actually capturing anything. The next thing you knew he flew straight at us missing our heads by less than three feet!

I've been reading a wonderful book over the last few days called 'Modern Wildlife Painting' by Nicholas Hammond. It covers American and European wildlife art over the last 200 years more or less. One repeating theme is familiar to me: berating wildlife art that relies too much on photos and too little on real life experience and field sketching. He mentions artists like Liljefors who were active hunters, who lived in the natural world, and knew it through experience.

Being a city dweller, even though I grew up on the outskirts of a small town with farms and fields nearby, I realize that my experience of nature is limited. I don't 'live' in it, except as it exists in cities. So I can ID a hawk. But I really can't tell you much about it. Today's experience was exciting in the sense that it gave us a glimpse into the hawk's life from his perspective, not ours. He was hunting. We were unwitting witnesses.

I did a field sketch of the hawk that is below. The bottom sketches show him after he landed right in front of us. At least one of them captures I think the sense of movement as he tried to plant his feet and talons firmly on the prey, which may or may not have actually been there.

At top is a quick watercolor based on a photo I also took at that time. What's most amazing to me about the photo, and what I tried to capture in the sketch, is the way his legs showed enormous strength and his wings were pulled up as though he was going to use them as weapons. In doing the watercolor I tried to capture the strength and forcefulness of the hawk at this time. In some ways it doesn't really look like a hawk. But this is pretty much what I saw. Animals can always surprise you, as long as you take the time to visit them in their world. 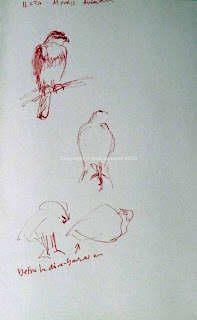 I also did some quick field sketches of Canada Geese at Valley Green a few days ago. They're below. They are a very common, and often unloved, bird. But they are wonderful subjects for drawing. 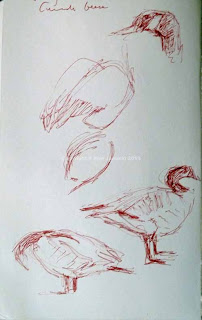