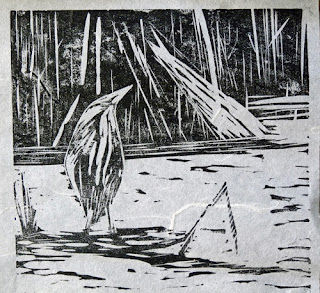 I believe I mentioned in my post on field sketching in Cape May that it was frustrating to have the best look I've ever had at an American Bittern and find that my pens wouldn't work. The combination of rain on the paper, the paper sizing and the ink from pen just became the epitome of recalcitrance. The pen wouldn't make marks.

But I chanced harming my camera and took a few photos of the Bittern just standing stock still out in the rain. Yesterday the developed prints from those photos arrived, just as I'd picked up the first ever linoleum blocks I've ever bought or used from the local Dick Blick. I'd been downtown for another appointment and decided to wander in and look around. Always more expensive than I'd planned.

In any case before you knew it I'd done some quick sketches from the photos, found my ancient woodcut carving tools and well as some larger wood carving tools, dragged out some ancient Japanese woodblock paper whose name I no longer remember and started to work.

Above is the third version. I'm really not sure if versions two or three improved on version one but I had to give it a try.

Those readers who've seen my charcoal drawings won't be surprised that I take to woodcut and now linoleum cut. I do have a predilection for graphic quality in art. I can appreciate many types of art and work in many ways. But I do feel comfortable with this.

My guess is that I'll eventually move on to woodblocks, even though wood can be the epitome of recalcitrance itself. But for now I think it's going to be linoleum. Of course multi-color is a temptation but I better resist for awhile.

And of course I'll have to revisit artists like Andre Rich and Kim Atkinson both of whose work has always struck me.
Posted by Ken Januski at 1:58 PM

...beautiful!!! I love everything about this piece. I've never had prime viewing for an American Bittern...glad you did!

Thanks Kelly. I'm very happily surprised by the positive reactions this piece has gotten.

As far as bitterns we rarely see them. If we do these are the circumstances: in the almost complete dark by the side of the car at Horicon Marsh in Wisconsin, in flight after being flushed. But this trip we saw them three times, twice in flight and this one, just sitting out in the rain, absolutely oblivious to everything. I had my scope on him and was all set for a detailed drawing. But my pens wouldn't write!! I just got a hint of a sketch and then about 10 photos. If this turned out well it's probably because it was such a strong image when I saw it.