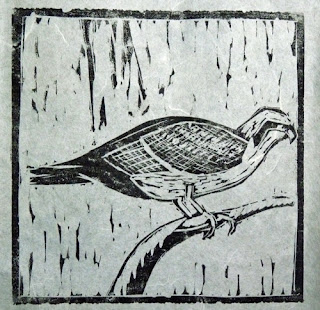 When I first started the prototype of this blog, at what was then a web site, one of the motivating factors was seeing an osprey at the Wissahickon in late fall, November if I remember correctly. We rarely see osprey here. But the more I've birded the last few years the more common I see that they are, particularly in spring and fall migration.

Still it was worth noting when I started talking to people at the Wissahickon on my last two walks and each time an osprey flew up and landed nearby. Yesterday a woman I didn't know stopped me, I'm sure because of my binoculars, and asked me if I knew anything about birds. Then she described an osprey, which promptly flew up and landed in a nearby tree with a fish.

After a few minutes I told her I just had to draw it. The result is below. It was an immature so had far more markings on its feathers than an adult osprey did. 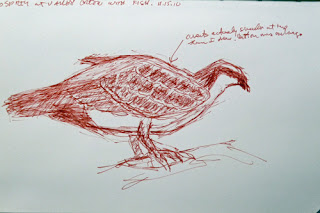 When I got home I decided to try a linocut based on the sketch. The results are at top. I think it looks quite a bit different than the recent American Bittern.

I had to decide what to include in the background and decided to stick with an empty sky. But I'm not sure how well that worked. To a certain extent the print looks cartoonish. But I think it still gets some of the sense of the osprey.

In researching woodcuts I found an old book I had on printmaking. As I looked at it I realized I got it when I taught a course in printmaking. I'd completely forgotten about this, mainly because is was so long ago. As I recall I only taught etching. Still it was a surprise to recall that someone had once actually paid me to teach it. As anyone who has taught college, or maybe had any job, knows though, someone is always asking you to do something a little outside your area of expertise. Such was the case with me and my printmaking course.
Posted by Ken Januski at 9:23 AM