From a Site to a Blog 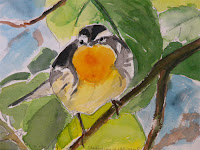 Today I copied over most of my original Birding and Drawing Notes site. That site began for a number of reasons: I realized I had a free hosting site available to me; I wanted to have a place to show small sketches that I'd done; I wanted to be able to publish some writings on art, birding, and possibly programming; and it seemed like a good opportunity to explore a different programming language than the one I use on my primary web site.

The intent was that it should be analogous to a sketchbook or notebook. At the time it seemed that this was a better alternative than a blog, mainly because I didn't want to be burdened by the constant updates expected of a blog. And I still don't. But I have also realized that I don't have time to create my own web page every time that I want to post a sketch or a few thoughts. I already spend too much time updating my main site. And I never found time to investigate that new programming language. For quick postings a blog, at least in theory, seems easier. Time will soon tell.

For what it is worth the following are my original notes on why I preferred the web site to a blog:

I don't want to be tied down to timely updates. Though personal computers and the web have brought a wealth of tools to individuals they can also become harsh taskmasters. Do I want to spend time birding, sketching or whatever or would I rather cut down on some of that time so I can update a database with my sightings, possibly write about them, scan and edit the sketches, and publish then on the web? My preference is to use the pc and the web only when I feel like it, not every time something of marginal interest occurs in my life.

One undercurrent that you'll find is an apology for drawing and painting from photographs rather than from life. I have no doubt that much is lost in any art work that is derived from photographs. But sometimes it's just very difficult to sketch, let alone, paint a fleeing Blackburnian warbler. It's often a choice between just viewing such a striking bird, losing that moment of appreciation and replacing it with a hurried attempt to photograph it, or finally, making a desperate attempt to get it down on paper.

Most often I'm happy just to look. More rarely I'll try to get some photos, which will eventually be the source for drawings/paintings(see top right). Even more rarely I'll try to draw or paint it on the spot. The sense of immediacy that comes out of most drawings done from life is hard to replace. On the other hand it's often difficult to get much down on paper in the few seconds that I might view some birds each year as they pass through on their migratory way.

As time goes on I hope to show more work from life.

One other undercurrent is the Wissahickon Creek area of Philadelphia. Much of my birding and other outdoor activity takes place there or near to there, the Wissahickon itself, Carpenter's Woods, Morris Arboretum, Schuylkill Valley Nature Center.