The Geese Before the Snow

So I had a nice day out birding today, seeing a number of new birds for the year. When I got home I had a very late lunch and turned on the television to see a blizzard warning for New York City. Blizzard?! We're not exactly next door to NYC but close enough. How could the 1 inch that was predicted for us turn into 12-24 for New York? Well as soon as I investigated I saw that we were now expected to get 14-24 inches.

So I guess that may help to explain the flock of 750-1000 Snow Geese that I saw flying over Morris Arboretum today. I was still changing shoes in the back of the car talking to someone from the arboretum when we heard some squawking, a squawking that didn't sound right for Canada Geese. I grabbed my camera and binoculars which were still in back of car and not yet around my neck to take a quick look. In the next minute or two three large flocks flew by. The photo above shows that they are in fact Snow Geese. The top photo show just how many.

The top photo is part of what we thought was a flock of 200. But there are 229 birds in that photo and it's not the complete flock. So my guess is that we actually saw closer to 1000 Snow Geese.

Is their flight related to the upcoming storm? It's hard to say but it's a noticeable coincidence.

As I walked through Morris today I saw spots where I expect to see warblers and other spring migrants and breeders. That got me started thinking about spring. I do love the birds of spring. But I've also come to love the birds of winter, like Snow Geese, and Merlin, pictured above. Pileated Woodpeckers are here all year but they're often easier to see in winter. I like the photo above because it shows (though you may need to magnify it) the red on sides of the cheek of the male woodpecker.

Other birds more commonly seen in winter include ducks like the surprising Northern Pintail and American Wigeon joining the slightly less surprising American Black Duck and quite predictable Mallards in the Swan Pond at Morris today. Below them one of two beautiful Red-shouldered Hawks seen at Houston Meadows earlier in the week.

With such birds around right now it's hard to be anxious for spring and its birds to get here. Though I may have second thoughts depending on how large our next snow fall is. 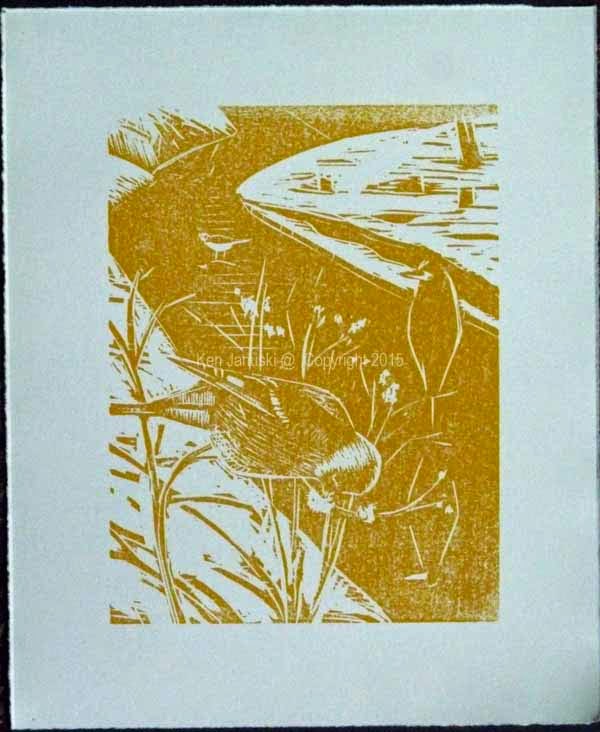 Amidst all this winter birding I have continued work on my new reduction woodcut. Above is the first color printed on Rives Heavyweight paper. I still have 2-3 more colors to print. I had thought I could get by with just two, but I think I need to add another brown for the gold finch, and then a blue and a black. If I'm snowed in for the next few days I may make good progress, a term I confess I've never understood. What other kind of progress is there? Bad progress. Back before the world of business totally destroyed the English language that would have been called regression.
Posted by Ken Januski at 5:56 PM