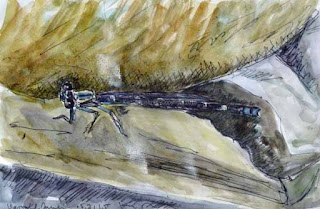 While trying to SEE let alone identify or sketch dragonflies that we've seen in backyard and at Morris Arboretum and the Manayunk Canal over the last few days I was struck by how incredibly difficult it can be to use them as subjects for art. Some, not all, seem to never sit still. Worse they constantly change direction so that it's difficult to even take photos. I say this because with other subjects you might reasonably consider that the subject will continue in the same direction. So you can focus the camera a little bit ahead of the moving object hoping that the shutter will click just as he flies by. Forget that philosophy with dragonflies. They instead will have made two or three 90-180 degree turns instead of heading on to where you expect them to be.

I seemed to remember a quote from either Delacroix or Degas about being able to sketch a cat as if fell out of a window. Hmm. I don't think I have any hidden antagonism to our cats. As it is it turns out the quote was from Delacroix and he said that if you couldn't sketch a man jumping from a 4th floor window before he hit the ground you had little future as an artist. But there at least gravity is at work. You pretty much know where the man is heading. He won't make any 90 degree turns or looping curlicues. That's the source of the post title. Compared to drawing dragonflies from life Delacroix's task is easy.

Yesterday I took a number of photos of the small damselfly at top. As usual it looked unusual, perhaps a damselfly we'd never seen before. But I know better. It is, at least I'm pretty sure, a Variable Dancer, a damselfly fly that we've seen before including at Morris.

You can probably see why this type of photo, or sketch if I'd tried, doesn't often lead to interesting art. The seen is always one of incredible flatness, an almost two-dimensional subject against a flat two-dimensional background. Flat, flat, flat. I think that's one reason that when I use dragonflies in my artwork I make them small, part of a larger scene so that their two-dimensional qualities won't be so evident.

On the other hand if I paint them small I lose much of the detail, which is often quite striking. There are plenty of people doing illustrations of dragonflies and they concentrate on the detail, often at the expense of a sense of either animation or environment. But it's hard to get both. I try it various ways. The way I've tried here is to use a pen for the sketch. I know I won't be able to get many details, that the ink will run, and that every mistake will be there to stay. But it does seem to give me some chance of getting a bit of artistic spontaneity into such a horribly flat composition. The Dancer does disappear a bit more than I'd like but at the same time the painting doesn't look like a detailed, but somewhat dead illustration. Since dragonfly season has just begun I'm sure that there will be many more opportunities ahead. 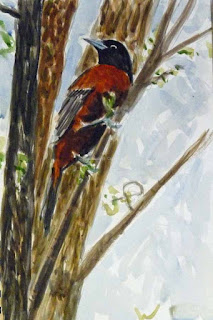 I printed another color on the two-block reduction woodcut of the 'Black' Squirrel, Palm Warbler and Mourning Cloak butterfly and it is below. But the ink continues to take a long time to dry so I had to stop work on it and let the ink dry. In the meantime I decided to try some sketches based on many photos I've taken over the year of 2015. I don't like working from photos. But they can be good for studying details of birds that are often hard to see in binoculars. So anything based on them is almost always a quick study. I can't see doing developed work based on them. In this instance I happened to see a lot of Orchard Orioles over the last few weeks so it was nice to be able to see, and sketch, some of their details. This is a quick pencil and watercolor sketch in a Stillman and Birn Gamma sketchbook. 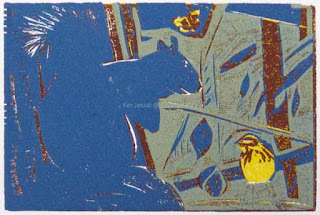 And finally the newest state of the two-block reduction woodcut. After much experimental proofing I decided that I needed to use a lighter tone in the background on the right side, especially as I wanted it to contrast with the black of the squirrel and tree on the left. The last step, I hope, will be to print that black, and to determine how much to leave on the right. This is a 4x6 inch print. It seems ridiculous to be making so many difficult artistic decisions about something so tiny. But what can I do? I've started and I'll finish. Hopefully the results, though small, will prove to be worth the effort.
Posted by Ken Januski at 11:20 AM