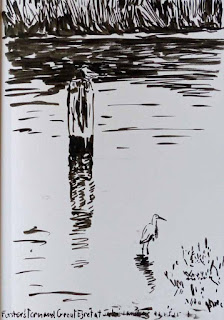 I think it's been a week since I finished the combined linocut/woodcut of Winter Wren in leaves. But it's been a busy time and I haven't gotten around to showing it here yet. One of the reasons for the delay is that I've been out walking and birding and taking some photos.

As the weather gets colder it's harder to convince myself to sketch from life outside. I inevitably start going through my photos and field sketches looking for a subject for a new painting or print. That was the case recently with most of these brush pen (either Kuretake or Pentel) sketches. All but the Cooper's Hawk are from photos taken earlier this year. The earliest, above is a Great Egret with Forster's Tern at Jake's Landing near Cape May, NJ. I liked the scene but made a mistake in bringing the dark reflections on the water down so low that the tern more or less disappeared. 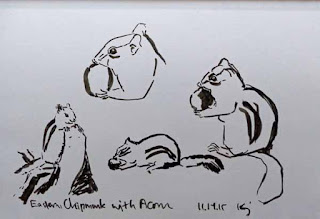 More recently I've seen a number of Eastern Chipmunks. Though I'd like to sketch them live, and occasionally they do sit still, I'm so unfamiliar with them that working from photos seemed like good practice. And of course the unadulterated cuteness of chipmunk and acorn was hard to ignore. 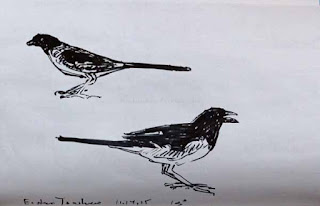 The Eastern Towhee above was I think from early spring. As usual I like it when I can see the full bird, head to toe. That makes it easier and to me more worthwhile sketching. With the full bird in sight it's much easier to get a sense of movement, weight, balance.  As usual it is hard to exaggerate the size of the tail. 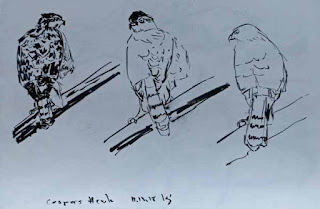 The only recent photo was the basis of the sketch above. It is a Cooper's Hawk. You may agree with me that the one on the far right, where I ignored the feathers to a large extent, is much more successful. One of the things that I most like about using a brush pen is that I'm forced to be both simple, quick and decisive. It doesn't lend itself to tentative strokes.  And so I think there is an immediacy and sense of spontaneity that is appealing. On the other hand if you make a mistake you have to live with it, as in one of the chipmunk sketches above where the arm is much too small and out of scale.

I continue to do these sketches because I learn from them. And I'd like to incorporate their simplicity in my prints. Time will tell. 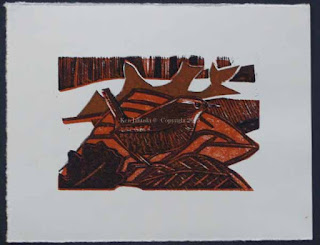 And finally the completed print of a Winter Wren in leaves. It is a combination print of linocut and woodcut. I printed it a few years ago as a black linocut. But I always felt that it wasn't as colorful as it might be. Since I wanted to experiment with a new water-soluble ink I returned to it as the basis for a color print. I printed the original linocut in black using the new ink, Caligo Safe-wash. I then used my old Daniel Smith ink to print orange on a woodblock and overprint the black. I then went back to the linocut and printed a Daniel Smith brown after having cut away more of the block to that some of the color created by orange over black remained. My intent was to cut a little more of the linocut away and then print Caligo black on top of the entire print. But as I proofed I kept feeling that the black was too dominant. I also found that the Caligo was too glossy and out of keeping with the more matte Daniel Smith. So in the end I carved away most of the linoleum block and then printed what remained with the very little Daniel Smith black that I still have.

I am happy with this and it's fulfilled my goal to a large extent of making the original Winter Wren print much more colorful.
Posted by Ken Januski at 3:58 PM