What do you do, just listen? 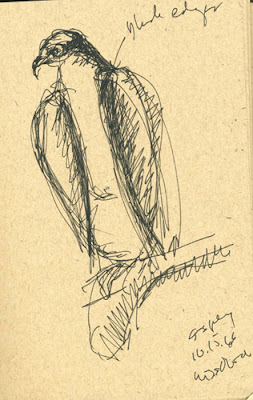 This post is a quasi-anniversary for this blog. A little over two years ago the sight of an osprey at the Wissahickon Creek in Philadelphia was the impetus for starting a web site devoted to art, birds and nature. About nine months ago I migrated the contents of that web site to this new blog. Near the very bottom of this blog you'll find that post.

We had never found an osprey to be a regular visitor there. The only other time I'd seen one was the day after the general election of 2004. So it was a real surprise to find one again 2006. Though ospreys were in great decline in the 1950s due to DDT they have made quite a comeback. We see them frequently near large bodies of water, often the ocean, especially near Cape May, NJ, but also at the large water impoundments of the John Heinz National Wildlife Refuge in Philadelphia. We had heard rumors of them being seen at the Wissahickon but we'd never seen any ourselves. When we did it was a momentous enough event to get me to start this blog.

Yesterday we took a 4 1/2 hour walk at the Wissahickon. This was a well deserved vacation after 6 days of stripping wallpaper, spackling, sanding and painting at home. Many of the same birds we saw in that post of two years ago appeared: ruby-crowned kinglet and golden-crowned kinglet, great blue heron, many downy woodpeckers, et al. But no osprey. Then we heard the full-throated whistle that accompanied the osprey two years ago. Examples of osprey calls can be found at the Macaulay Library of the Cornell Lab of Ornithology. Just search for 'osprey.' It has been awhile since we'd heard him and so I wasn't absolutely sure it was an osprey.

This is a bit hard to explain for someone who hasn't experienced it. But I've always found it thrilling to be able to walk into the woods, hear all sorts of bird calls, perhaps sprinkled in with the sounds of squirrels, chipmunks and who knows what else, and be able to stop and identify the source of each sound. This isn't perfect of course and I'm often embarrassed at my mistakes. But most of the time they are correct. Now why this should be so satisfying I can't say for sure. But I think at least part of it relates to what I said in 'What do you do, just watch them?': skill and the sense of being part of a world, and a somewhat orderly one at that, which is far different from the workaday world.

As we continued to hear the call I was certain that it was an osprey. And sure enough one soon winged by and down the stream in search of fish. My guess is that the ravine-like structure of the Wissahickon valley amplifies the sounds of birds there and makes them sound fuller than they might elsewhere. I think this is especially true of a larger bird like an osprey, compared to a smaller bird like one of the kinglets. The examples from the Macauley Library noted above are nowhere near as full and rich as what we have heard at the Wissahickon when we hear an osprey. In fact I couldn't think of another bird, at least that we're likely to see there, that has such a full whistle. And that's finally what made me decide that an osprey must be near. Fortunately he soon flew by to confirm this.

So sound can also be a very large part of birding. If you are interested in bird sounds there is a wonderful book by Donald Kroodsma called The Singing Life of Birds. It includes a CD with sonograms of various bird songs. This might sound just a little too esoteric for many but if you have any interest in birds, and especially if you also have an interest in music, I think you'll find it fascinating. After reading the first part of it, about the variation in the songs of song sparrows, I listened to our backyard song sparrow render over 10 different songs. The guidebooks of course mention the one song of most birds, but after reading this book you'll realize, and hear, that birds are individuals, just like you and I.

There was one other similarity between yesterday and our birding trip of two years ago when we saw the osprey: the great blue heron. They are much more frequently seen at the Wissahickon than are ospreys. And yet they're still not all that frequent, perhaps one out of every 5-10 times we go birding there. I just did a quick check to see if there had been a trout stocking there recently and could not find out. But trout are often stocked in the Wissahickon in the fall as well as in the spring. Perhaps that has something to do with the appearance of these two wonderful fish hunters.