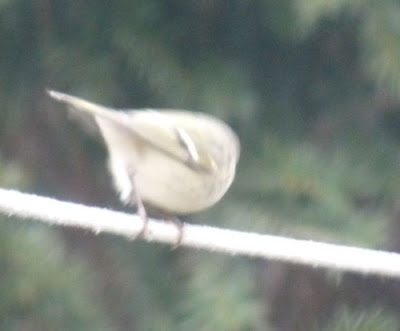 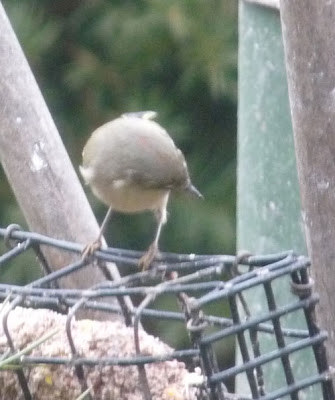 I wrote a post on this in late February of 2008. When I've seen kinglets close up, i.e. so close I don't need my binoculars, they always looked like ping-pong balls with wings. Perfectly round. But also constantly in motion. So I decided that I really shouldn't call them ping-pong balls. That perfect sphericality implies solidity and stasis. That certainly doesn't describe kinglets. Then 'Flying Hiccup' popped into my head. That sounded right. Kinglets are constantly exploding with movement, just like an uncontrollable hiccup.

The two photos above show a Ruby-Crowned Kinglet from this winter. I'm not sure if it's the same one that was here last year but it is possible. My guess is that it's even probable, but that's just an uneducated guess. What is striking about the photos is how they show that ping-pong ball sphericality.

I've been trying to sketch this kinglet from life over the last few weeks. I've not been successful. But one of the first things that has struck me is the sleek profile of his upper torso. The head moves gradually and sleekly into the mantle and back, much like a Red-Eyed Vireo. This was a great surprise. I expected Roly-Poly. I found Sleek! 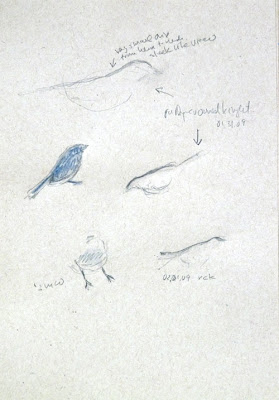 The sketch above shows three attempts to capture that sleekness (along with two juncos, who also didn't sit still for long). I think I may have noticed this sleekness due to my current reading: 'Lars Jonsson's Birds.' This book is incredible! Some people have said that Jonsson is the best living bird artist and he has to be one of the best. He does a spectacular job of melding detailed observation with artistic rendering and sensibility. I may write more about him at another time and have published a review of this book at Amazon.

Jonsson emphasizes close observation from life, both in his writing and in his art. And he says he just draws what he sees. If the bird leaves before he finishes what he was drawing he doesn't rely on past knowledge to finish off the sketch. He just stops drawing, making sure that anything he puts down in a sketch is just what he actually saw. Eric Ennion's advice is similar but stronger: "STOP", he says when the bird has moved or flown. Don't use your visual memory of it, at least not when you're making sketches. Only use sketches for real, observed portrayal.

In trying that method today I of course didn't get far before the kinglet flew. In fact I wrote this post a week ago and have held off on publishing it in the hopes of including a better sketch. No such luck though the kinglet has been here for a few minutes most days. The one thing I kept seeing was the sleek line from head to back. That is what I have tried to emphasize in the sketch above. It's also what I look for each time I see him. One day I'll finally do a decent sketch.

I first wrote about sketching kinglets even before my post of a year ago. I think that it's been at least 18 months now that I've talked about trying to sketch them. Like mastering watercolor it has been a difficult task. But it is a worthy one and one I'm confident I'll succeed at eventually. In the meantime the work of Lars Jonsson has been a great example of the possibility of accomplishing such goals.
Posted by Ken Januski at 6:17 PM

Ken,I know how frustrating it is to draw live animals. And except for the occasional pigeon I've never even tried birds. Sleepy old lying down fighting bulls even used to be too much for me. If I followed Lars Jonsson's advice I'd never have more than a few lines in my notebook!
I've never seen a Ruby Crowned (or any other) Kinglet but it does look like a white ball in your photos. What is that he's sitting on in the second one? Looks like our old muskrat traps.

Thanks for the sympathy on these live bird drawing attempts of mine! Though I'm sure you exaggerate a bit about just how difficult the lying down old fighting bulls were...

It is difficult but I do think it's worthwhile. It would probably be smarter to start with a gull or something larger though, that tends to sit still, rather than these kinglets, which are small and never sit still. Unfortunately I'm stuck with the littler birds of our backyard in winter.

I think both Jonsson and Ennion were just saying that sketches ought to just include what you really observe. Then you can rely on them if you use them in the studio for more complete work.

Still it's been a painful exercise for me. But I've vowed that this is the winter that I'm going to concentrate on drawing birds from life so I'm going to see it through. Sometimes I feel like I'm moving backwards but I'm confident that it will eventually pay off and that eventually I can stop complaining about all of my setbacks!!

I've never seen a muskrat trap, at least that I know. This is a suet holder. Suet used to be just rendered and shaped beef fat I believe. Now you can get fancy pre-made versions of it that include berries, nuts and even insects. Its purpose is to provide protein to birds, though my own experience is that it primarily feeds squirrels and starlings.............

Speaking of muskrat traps I think I saw on your blog reference to Toledo, OH. Did you by chance see muskrat traps near Magee Marsh and that area? For the last 5+ years we always make a day long stop there to do birdwatching as we travel back and forth between Pennsylvania and Illinois. It's always a pleasure to be able to stop and visit.