The Trouble with Hybrids 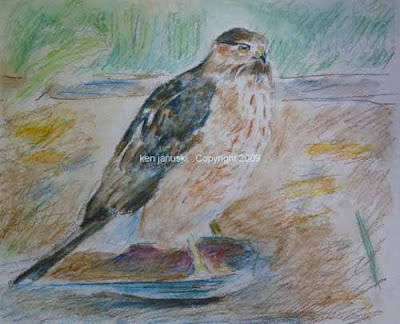 The trouble with working with hybrids, or multipurpose tools, is that they can be confusing and sometimes not as good as the original, unadulterated tool. Today's case was watercolor pencils and waterbrushes.

I used a larger piece of watercolor paper than usual, 11x14. I also worked from a photo because there just wasn't much activity outside at the feeders. Though the drawing proceeded fairly well I found myself using the pencils in such a way as to use only one color in each area. So the front of the hawk was just white paper with reddish markings. I just used one color in each area. I also was actually doing more of a drawing that I thought I'd change later into a painting. But I don't like working this way and the world doesn't look this way. Colors merge; they overlap; they intermingle. They also intermingle in good paintings and rarely just stay in one area. And drawings don't magically transform into paintings.

I also found that though I'd been happy with using the waterbrushes on smaller works they didn't really seem to hold enough water for this larger scale work. No sooner had I put down the brush than it was out of water. The first version of this watercolor, above, shows the small color washes from the waterbrushes. Their spotty quality bothered me but I was happy that it forced me to keep much of the white of the paper. 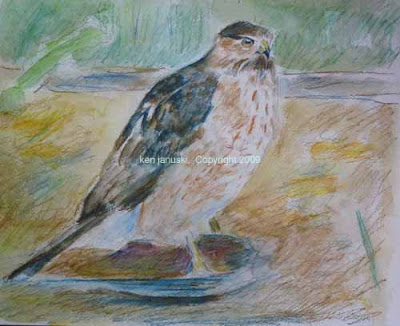 When I looked at the earliest version of painting at top it just didn't look coloristically unified. I decided that I needed to abandon the small waterbrushes and pick up my normal watercolor brushes and paints. I mainly just used plain water to pull watercolor out of the previous watercolor pencil marks but spread them out into larger color areas. This seemed to improve things slightly. 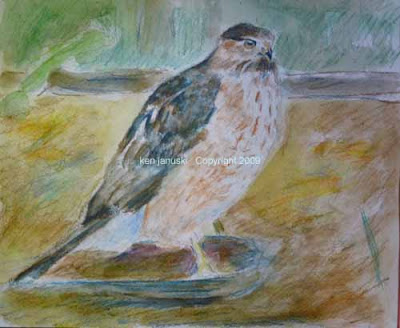 But when I stepped back and looked at it the painting still seemed disorganized, a somewhat confused hybrid of watercolor pencil, waterbrush, watercolor and watercolor brush. It also seemed a half drawing/half painting, half-sketch/half watercolor. So I went a little bit further in this last version and used broad watercolor washes to wipe out the detail in some areas and try to unify the painting coloristically. Of course in doing so I've lost much of the vibrancy of the white paper, most of which only remains isolated in the hawk itself.

All in all the problem is in me, not my tools. The tools are fine; I'm just having a hard time making them do what I want. If I'd had a more unified vision of what I was about this sketch/painting probably would have proceeded better. But just as many birding ventures find few birds, many attempts at art, don't come out quite as well as you'd hoped. This was a quick work, two hours at most. I hope that I've learned something for the future.

After I posted this I realized something more. Though the work took two hours at most I should have used more time to just think about it, especially the surrounding environment of the hawk. I'm used to just starting and improvising as I go, especially when it comes to background. This seems to be a fairly common problem in bird art. Watercolor, even as far as I can tell watercolor done with watercolor pencils and waterbrushes, really is better with some advance planning. That's been a very hard lesson for me to learn.

I have been thinking about how comfortable I am working in charcoal. But I've used it for years and that's why. Watercolor, whether pure or hybrid is still very new. It has the excitement of the new, tempered by the frustration of the new.

But the most important thing is to keep working. As John Bogle says in his new book 'Enough': you must always press on. That's the path to accomplishment.
Posted by Ken Januski at 5:39 PM