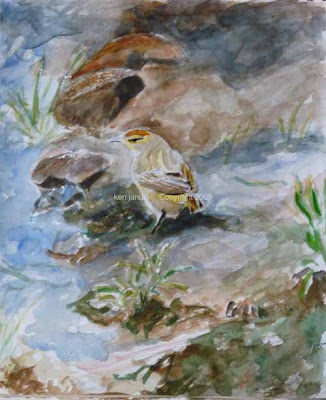 even if it is just a Palm Warbler in the Mud.

A quick watercolor based on a photo of a palm warbler seen at Oakdale Nature Preserve in Freeport, Illinois in April, 2008, in fairly wintry conditions.

We will forget about all I've said regarding values and tonal contrast for this one............... I remained somewhat true to the muddy conditions of the warbler's habitat. And though I thought of tonal variety as I worked it just seemed to disappear. I think the white paper, peeking through in places, counteracts the mud somewhat. I may do more work on this but most likely I'll just leave it as is. I fear more work will only make it darker and muddier.

The palm warbler truly is a sign of spring in our area though. Pine warblers are often earlier but less likely to be seen. But when you see the golden glow of the palm you know that spring is on its way!
Posted by Ken Januski at 5:23 PM

Ken: I've stopped by several times to admire your water-color of the palm warbler and now I want to finally tell you.
By all means lie if it makes the picture better. (Though I remember the sculptor Epstein criticizing his French art teacher for telling students never to erase or correct. "A bold, false line is better than a weak, doubting one," he would say--or something similar. Yes and no.)

Thanks so much for the compliment. I'm glad that you like the watercolor. I like it myself, in spite of the somewhat muddy tones.

In the photo everything, including the water, was muddy brown. As I progressed in the painting I thought: I can't stand this! I need some color! Thus entered the blue.

All in all I'm more sympathetic to what Epstein said. Often your first decisions are the truest. I wonder if that's not why it's sometimes hard to change them. You know that they feel right. And yet something else seems wrong, like the mud here. So you give up the sureness of spontaneity and make a gamble on your knowledge, experience and ability to improve on those first decisions.

When I worked abstractly this was no problem at all. I read a recent interview with Larry Poons where he said, if I remember correctly, that he didn't know what he was painting until he put something down and could then react to it. But in representational art it often doesn't work that way. And watercolor isn't really conducive to it either since it can't take a lot of overwork. My guess is that you would say the same about sculpture.

So I often need to take a deep breath or wait a day or two before going back into my original painting and making changes. Much of the original spontaneity is gone. But if you're successful I think that the artist really knows that they've improved their work, and hopefully his audience does as well.

Ken, I think this sweet wc is quite fresh. I know you were feeling the dregs of mud but you certainly didn't get mud :) Very nice.

I like the strong vertical design on the left and then the surprise of the bird.

I'm quite happy to hear that you like the watercolor. As I told Swallows i actually like it myself, even though it seems to contradict all I've been saying about tone!!

I do think that the blue on the left saved it. And I did do it all at one sitting so maybe that helps with the freshness.

Though Winslow Homer Tsometimes did reworking in the later watercolors that I love so much they never seemed labored. Except for some he did in Cuba they always seem fresh as could be. If you can get that sense of freshness in your watercolors then I think you've got a winner.

So I'm very happy that it seems fresh to you. I hope it will be the start of a trend!