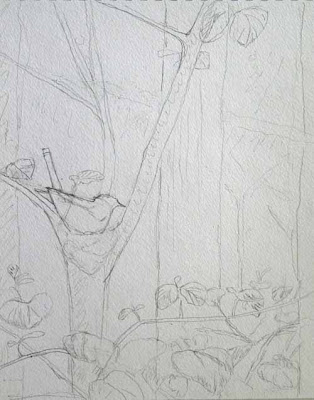 Like much of the Northeast we've been warned that we might have our first real snow of the winter. Actually it's not all that uncommon to get big snows in early March here in Philadelphia.

While waiting for it I decided to venture forth in watercolor once again, this time based on a photo I took of an American Redstart on nest in a Witch Hazel on Pocosin Fire Road in Shenandoah National Park. Anyone who knows redstarts will notice something odd. This looks like a male. This photo is old so I don't remember the details now. But I really can't find a way to turn it into a female. There is the yellow-orange on sides of tail but I believe male has that as well. And the upper body just seems too dark to possibly be attributed to shadows. So I think we have a male on nest. 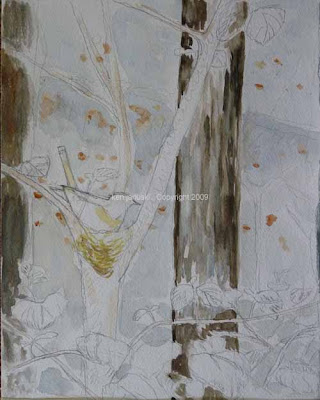 OK, you might ask, but what about the sausage? Well I've decided to include five photos that show the work in progress. It also is not done but I've lost all natural light here so I'm stopping for today. Some of these versions aren't exactly attractive or very hopeful. It's the equivalent of watching sausage being made. Still I think some people, especially artists, might find it interesting. There are points here where it almost looks hopeless. But I think things did get better. 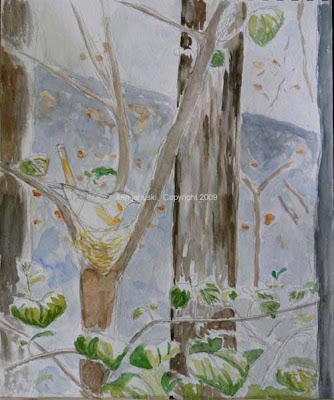 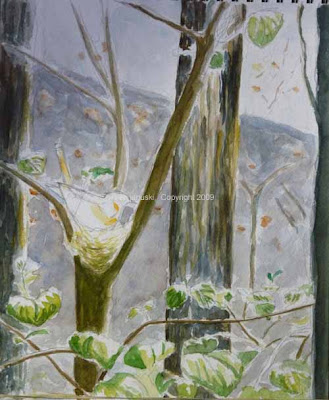 As anyone who reads this blog regularly knows I'd prefer not to work from photos. But there hasn't been much activity at our feeders and the weather isn't great for venturing outside to work. So I'm going through old photos looking for sujbect matter. This is very limiting, and often not too inspiring. On the other hand art is where you find it and sometimes you just have to make the best of what's available. 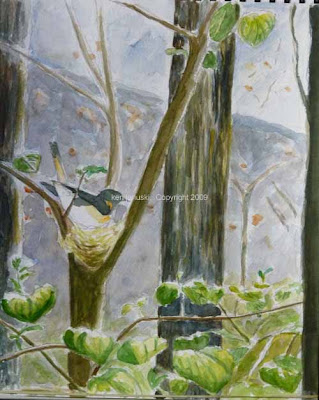 This is the last wersion for today. I'm not sure when I'll get back to it. But in this case I know that it's not done as it is. There's just no richness of color, and not much of tone. I hope that will appear in the next version.
Posted by Ken Januski at 5:45 PM

I like the triangular shapes of light that are forming on the large tree, then left to the bird and then the last part of the triangle on the lower foreground leaves. My eye keeps bouncing from one to the other.

Before I forget again, have you ever checked out Sara Wimperis blog, Muddy Red Shoes? (http://muddyredshoes.blogspot.com/) I think you'll really enjoy her watercolor.... heck, all of her work. She's also a part of Watermarks Blog (http://watermarks-art.blogspot.com/)

It's a very slow process for me learning to keep some light areas, both in terms of where the light is striking and in terms of white paper. I hope that they'll still be there when I'm done with this!

Maybe you pointing them out will help reinforce the idea for me. We shall see. I think it's been useful for me to start doing these larger watercolors. It's starting to make me more comfortable with a medium that I've come to love, but which hasn't been all that reciprocal so far.......

I'll definitely look at both blogs that you mention. Thanks very much for the links.