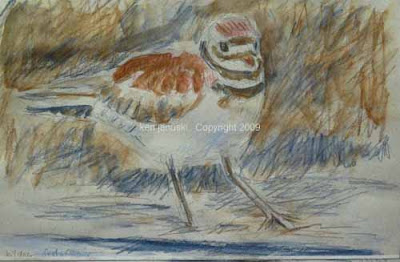 The weather report promised temperatures in the 60s today with possible thunderstorms once the morning showers stopped. But at noon it was still only 50 and sprinkling. Nonetheless we decided to go birding at Morris Arboretum. It just seemed like the right time to be finding our first spring migrants, especially since Pine Warblers, Louisiana Waterthrushes and others were starting to be seen in Pennsylvania.

We weren't disappointed. Well maybe if we had counted on the Waterthrushes..... It turned into a beautiful day, sunny, no more rain and temperatures in the 60s. Among the first birds of 2009 that we saw were an Eastern Phoebe, a Kildeer, in watercolor pencil and waterbrush sketch at top, and many Tree Swallows. 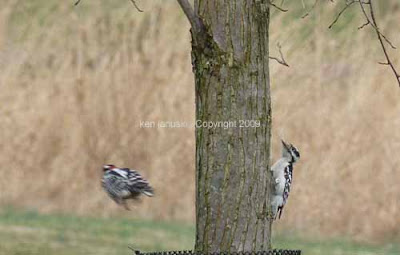 Along with that it's mating season for woodpeckers and 4 downy woodpeckers, 2 male and 2 female provided us with much entertainment. I'd prefer to show some sketches of them but they were moving so quickly that these photos were the best I could do. I THINK that the males were fighting for territory and/or mates and weren't actually trying to find mates. But it was hard to tell. All the downies were in the same tree but the females seemed to be ignoring the feuding males. 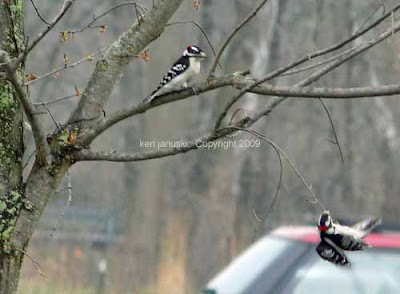 As I mentioned above the Kildeer sketch is done with watercolor pencils and waterbrushes. It's based on some photos I took today. Since it was supposed to rain I left our non-waterproof scope at home. That meant if I wanted to do sketches from life I needed to lift binoculars to my eyes for a bit, while balancing the pencils, brushes and sketchbook between by elbow and side. Then put the binoculars down, and pick up the others and try to sketch what I'd seen. Well I tried it briefly...But I didn't get far. So I reverted to the camera.

If I'd had more time when I got home I might have tried real watercolors and brushes. They offer far more possibilities than do the watercolor pencils and brushes. But the latter are fine for doing something quickly. There is something special about nature rendered as a drawing or painting that just isn't matched by photos. Thus my quick Kildeer sketch at top. 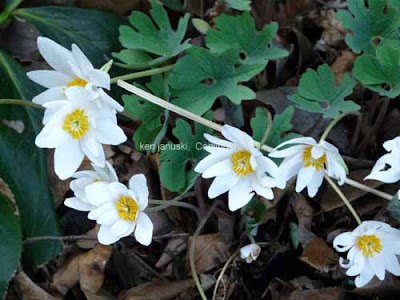 When we got back home our bloodroots, which I showed in bud in a post of a couple weeks ago, were in full bloom. As I recall they will only be in bloom for a day or two. But while they are in bloom they are striking. Some wildflowers have a pure white that just can't be beat by any of the many colors of the spectrum. Bloodroots are among them. That coupled with their interesting leaves make them a really beautiful addition to our garden. 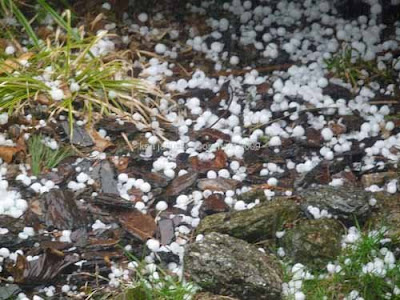 As I write I hear hail pounding against the house. I guess the threatened storms have arrived about 6 hours late. And I guess it's a good thing I took a photo of the bloodroot quickly. This hail has probably decimated them.................

Post-mortem on the bloodroot: not a single blossom left! Enjoy the photos because that's all that's left until next year, and of course the foliage.
Posted by Ken Januski at 6:21 PM