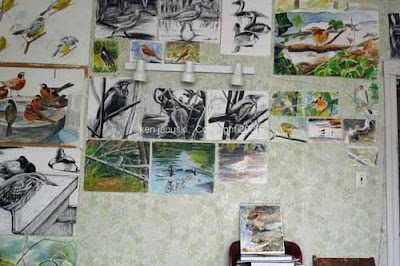 It's been over 13 months since I started this blog and I wanted to write a short anniversary note.

I wasn't really sure what I was going to do here. I hoped to use it to show new sketches, perhaps more developed drawings and paintings, and write about my birding and other nature-oriented activities.

In some ways it's been wildly successful: I think it's really been an impetus for me to do more artwork. I can't argue with that. The more time I spend on art the better.

Writing about birding and nature has not been as successful. But that's really because I've learned that though I am interested in them there are very many other bloggers writing similar blogs and my observations aren't really anything special. So I started off writing more about birds and nature but slowly I changed to writing more about art, especially art that has birds or nature as it's subject.

That seems to me to have been a pretty organic evolution. I'm sure readers might sometimes wonder just what kind of hodgepodge blog I have: sometimes it's about birding, sometimes about art, sometimes something else. Well every blog has a right to be just what it wants and hope that it finds an audience. I think along those lines. But I also think that it's grown into a blog with a fairly predictable subject: art about nature, especially my own art.

Another huge aspect of blogging though is the people I've met visiting their blogs, and sometimes welcoming them as visitors here. I was a skeptic about blogs for many years. Who would be interested in someone's personal writings, especially a few, million 'someones'? Well I found that I became quite attached to certain blogs and get a great deal of pleasure from reading them. I also feel that I've become part of a community. I'm not going to name any particular blogs here but blogs where I comment frequently will know that they are among them. As I said this has been one of the most pleasant surprises of the blogosphere.

Finally there's something I've kept out of this blog: art theory. As readers of other blogs know I can sometimes expound at length about art theory. This is a dangerous tendency and I've often felt that I ought to expound here if I'm going to go on at such length. But I don't. I may mention it once in awhile but I don't go at length about contemporary art history and theory as I have on other blogs. I think it would be too disjointed if I were to do so here. And I think it takes away from my main goal: to create art. So art theory is something that I'll continue to avoid here and probably on other blogs as well. Art theory is fine but I think for most artists they should really convince themselves that they don't have time for it. It can be enervating rather than inspirational. Enough said on that!

So Happy Anniversary to this blog and to all its readers!
Posted by Ken Januski at 10:38 PM

Happy Anniversary!! And, I totally agree with your paragraph about the blog community.

My blog anniversary is coming up on Earth Day. Have been working on something special :)

Congratulations on your anniversary. I'm glad you discovered my blog so that I could discover yours! I am having fun as a newbie and you have inspired. I love the mix of talents on the blogs that I read - art, nature, poetry, photography, science, reports from far off places...

Thanks for your art and your writing.

Thanks for your good wishes! I had told myself I ought to write something for my anniversary and then the time came and went with me being distracted by something else and it was soon long gone............

I frequent a number of blogs and websites. Especially on some news websites the reader comments remind me on a daily basis of just how much rudeness, self-centeredness and just plain nastiness can be found on the web. I'm sure something similar can be found on blogs, but I'm happy to say that my experience like yours has been overwhelmingly positive.

I think that in these hard times for almost everyone it's especially good to be able to find the decency, good-will and a sense of community that can be found at various blogs. That, and spring, put everything in a positive light!

I look forward to reading your anniversary/Earth Day blog.

Thanks for your good wishes!

It's always good to have appreciative readers, especially from readers whose blogs I admire.

With all the blogs in the world, and even with the 500+ blogs at the Nature Blog Network, I think I probably never would have found yours if it wasn't for the name. I just couldn't resist reading a blog with 'spicebush' in the name! And it's been a great discovery. If I have in any way helped inspire it I'm honored.

Here our spicebush is just showing some signs of leaves and I'm sure we'll soon see the tiny flowers. We only have one plant and so we're lucky if more than a few flowers get pollinated. Each week or so in spring I carefully lift each branch to see if I can find any fruits forming. If we're really lucky we'll get 2-3. As much as I love the leaves I love the fruit even more. I keep hoping for the day when we'll have all sorts of fruits in the fall for the birds. I think it will be a very long wait though..............