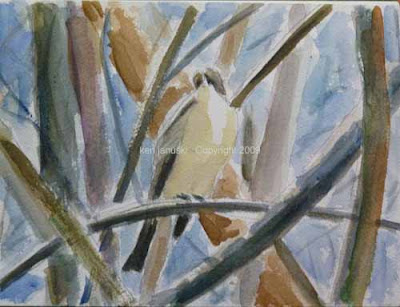 This watercolor, based on a photo from that day, was a quick one that I did this morning. It took 60 minutes at most. More than anything else I think it's an attempt to exorcise the darkness of the last watercolor ('Solomon's Seal, Meadow Rue, Birdbath'). It's also an attempt to start seeing and saving more lights in the painting, no matter what I actually saw. This Phoebe was buried in saplings, backed by a gray, overcast sky. Gray on gray. So I attempted to add a little color and some tonal contrast here. It's also just for practice. I love watercolor but am not yet all that comfortable with it. But a watercolor a day (more or less) may help improve that.
Posted by Ken Januski at 10:17 AM

Ooooooo! Shape man is back! Love the branches, their placement and colors. And the simplicity of the Phoebe. Bravo!

You know it was about 6-7 months ago or so in this post that I myself realized how important shape is to me. It came as a surprise, at least at first. But I guess given all the time I've spent on abstract work that is primarily about shape I shouldn't have been too surprised.

But you are the first reader who has noticed it so clearly! It's always good to get this type of comment. I'm happy you like it.

Now I need to keep up to my daily or almost-daily watercolor regimen.