Redstart on Nest, Continued, And Questioned 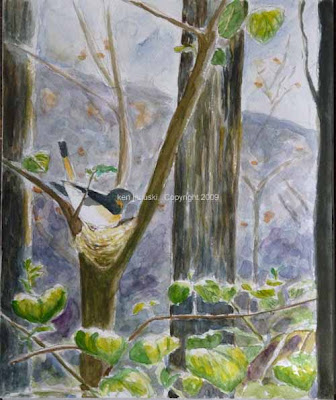 I think that this watercolor of the male(see caveat below) American Redstart on nest is done. I've gotten to the point where I'm starting to be finicky and that's the time to stop, at least for awhile. I've added some richness of color but I may have made it a little more monotone in the process. So time to let it incubate.

Speaking of incubation I mentioned that it seemed odd to see a male bird on nest. But in my experience that's not really all that true. We've had two interesting experiences where a couple alternated on the nest. More interestingly each bird made a special whistle or call as it came in to switch places with its mate. In one case the birds were Blue-Headed Vireos in Shenandoah National Park. The other birds were Baltimore Orioles at our rented garden at the Schuylkill Center for Environmental Education. Though we couldn't actually see in the nest of the vireos we later found the vireo nest destroyed and we found them building a new one nearby. Whether that means that they actually lost the eggs and had to start anew or whether just the nest was started and no eggs had been laid yet I don't know. But it seems unlikely that there would be any need to switch places if they were just building the nest.

In the case of the orioles it's possible that they were just trading off food gathering duties and not incubation duties. A Baltimore Oriole nest is a bit like a hanging sock, with the birds deep in towards the bottom. So unless you're right on top of it, which is unlikely unless you're in the tree, you really can't see what goes on. The couple could have been incubating the eggs or they could have been feeding the nestlings.

In either case it was a treat to be able to watch this, particularly the vocalizations that accompanied the behavior. I just did a quick online search and found this article on Blue-Headed Vireos sharing parental duties throughout the breeding cycle. So this is fairly common behavior with Blue-Headed Vireos. Further searching indicated that it is very unusual for this to occur in American wood warblers There is one documented study of a male Redstart
brooding nestlings. Given this it seems unlikely that this really was a male. Nonetheless it's hard to see how the photo upon which this painting was based does not show a male.

I guess this just goes to reinforce the notion that good field notes can be very valuable when birding. In January I took part in the Philadelphia Mid-Winter Bird Census and saw an unusual sparrow amidst the White-throated and Song Sparrows. Fortunately I DIDN'T have my camera. Instead I had a notebook where I quickly noted down the buff-orange malars, wash on chest, fine streaking and gray nape. These detailed notes confirmed for me that it was a Lincoln's Sparrow. If I'd reached for my camera instead I probably would have ended up with only an indistinct blur instead. I might never have known that I'd just seen what is a fairly rare bird for Philadelphia in winter.

So today I might try to sketch the Redstart as well as photograph it, making sure to add pertinent id notes as I did so. If nothing else I'd be sure to note the sex!
Posted by Ken Januski at 2:49 PM

Hi, Ken,
The foreground really pops :) And, given the season, I think monochromatic works well.

As for field notes........ I'm so thrilled with my discoveries that when I finally get a chance to research, I often get frustrated by my lack of notes. The good news is frustration leads to eventual success.

Thanks again. I'm happy to hear that the foreground works. It seems to me that one virtue of photography is that it may allow you to remember more of the scene than if you did a sketch instead. If I sketched the bird I probably would have gotten the sex correct as well as a more detailed study of the bird. On the other hand I might have been more likely to ignore the foreground. So I guess I have to thank the camera, perhaps grudgingly, for its help in getting the foreground to work.

I think you're right about the good news; if you're really interested frustration does lead to success. You learn not to make the same mistake a second time, or maybe for me the fifth time...........