Finishing off the Pintails 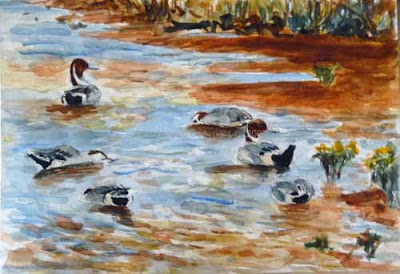 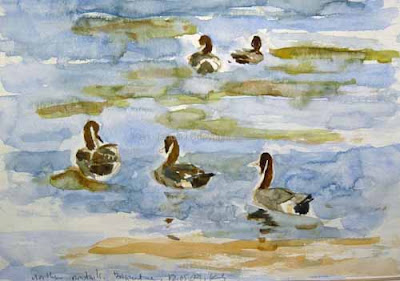 Who would have thought that the photos I took of Northern Pintails at Brigantine NWR at the end of October would be the source of so many sketches and watercolors? I suppose it was a combination of numerous good photos and the previous time I'd spent on other ducks, especially doing sketches of them. By the time I got to the Pintails I was ready to break loose from the detailed work I'd been doing into something more painterly.

I've had two main purposes in my recent duck work: one, do enough detailed pencil sketches so that I feel like I'm actually getting to understand ducks, and two, do enough short watercolor sketches that I become looser with it, but still don't become so loose as to abandon everything I've learned about detail.

I'm happy with the results, at least in terms of what I've learned. All of the works I've done are on lower quality paper. That allowed me not to get too precious about them. Nothing can kill good art quicker than preciousness. I'm particularly happy with a couple of the watercolors of Pintails. The one at top is very overworked. The Aquabee Super Deluxe sketchbook that I've been using for the watercolors is very versatile and amazingly sturdy for a sketchbook paper. Still it couldn't hold up very well to all I did on the first painting. But that is not the fault of the paper. It's mine. I just wanted to keep working until I got what I wanted.

And to a large extent I got what I wanted: a complete painting. I think more than anything else I've wanted to be able to do both bird art and watercolor in the same way I used to do abstraction and oil, as a vehicle for something ambitious, or at least something that seems full, not just a sketch.

Both birds and watercolor lend themselves to sketches and I love this aspect of bird art and watercolor. There can be a quick sketchiness that seems like life itself. But there are other times where I'd like to do something fuller and richer. The painting at top makes me think that this might eventually be possible. I'm starting to feel like a craftsman who's started to get familiar with his tools and can now start practicing his craft.
Posted by Ken Januski at 7:38 PM

I like the qualities of both. The colors are rich in the top - doesn't appear over worked to me. The other has the wonderful quick wc sketch feel.

I too, love the Aquabee Super Delux paper. It can be a challenge to scan though as it often ripples if I use too much water. I now carry a cellophane print bag with me so I can lay it below the page I'm working on. It helps save the pages below from buckling.

You know it was you mentioning Aquabee Super Deluxe on your blog I think that put the thought in my mind to try it. I used it to sketch at Cape May a month ago and wasn't all that thrilled, though I did like the size and sturdiness. But once I started to do quick watercolors on it I really was impressed!

...I've enjoyed your duck series, going from detailed to loose. I also liked your narration on painting from photos (the post where you mentioned the older artists had to paint from dead, stuffed birds). I would like to get better at painting from life. When you're in the field, you can hear the gentle quacking of the ducks....and the sound of the water flowing over the rocks (but when it's raining or snowing, I'll take a photo...)!

I always feel somewhat odd about criticizing photos, partially because I know that an accomplished photographer like yourself might come along and read my posts. And I can't deny their usefulness. Most of the duck series was based on photos that I took. It was reading that thread on better them than dead and stuffed birds that really got me thinking!

And I do know what you mean about times when photos seem far better. The many photos I took in your home state of Ohio at Crane Creek of a Lesser Yellowlegs and a Solitary Sandpiper have proved to be rich fodder for my artwork. And I just didn't have time to do any sketching as we were trying to leave and get on our way on the next leg of the trip.

On the other hand for me there is nothing as exciting as drawing from life. There seems to be almost a physical connection between you and what you're portraying. The excitement is heightened by the fact that you don't know how long the bird will stay in that position. And of course there are the sights and sounds that you mention. I think an artist, unconsciously or not, tries to incorporate all that into his portrayal. Maybe most important is that it really forces you to look at the bird and see it, and anything else you might decide to portray, in a more focused way. All in all quite thrilling!

Looking at your most recent photos of the Red-headed Woodpecker I'm reminded of the photos I took in Illinois along the Illinois River a few years ago. They are nowhere as striking as yours, which really accentuate the red of their head. I've looked at my photos over and over and just haven't found a way to make them into a painting. I always wonder if that would have been different if I'd tried to sketch them from life when I was there? Of course if was only slightly above freezing so it would have been a pain. Still they are beautiful birds and I've yet to find a way to portray that in a painting. Maybe one of these days.......