What Remains (of Two Feet of Snow) 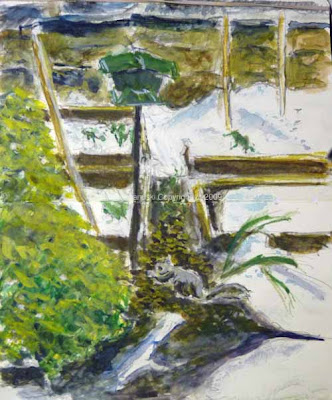 We had two feet of snow last weekend, setting a record for the last 100 years of record-keeping. It almost never snows before Christmas in Philadelphia, and when it does it's generally just a few inches that are gone before you can enjoy them. But not this year. At least 24 inches!

You would have thought that might have brought more birds and more types of birds to the feeder. But it didn't. There were more House Sparrows than usual but that was about it. Today was even worse.

There were NO birds. Yes no birds seen at our feeders during the entire day. The Sharp-shinned Hawk that's taken to sitting on our clothes pole next to the feeder might have some influence. But either he or a Cooper's make an appearance every few days and that never makes them disappear for the entire day. There were a few birds in neighboring yards though. Maybe they got better food for Christmas?

In any case as I looked out our backdoor I decided to do a pencil sketch of what I saw: much snow, one squirrel, a bird feeder on a pole, stone wall, four raised beds and a large Arbor Vitae, which generally hides and protects many birds.

I do want to continue to work from life. If I can't find birds to draw in this colder weather it still makes sense to try foliage, snow, earth. At some point they'll be simportant component of a scene that does contain some birds.

The work in some books I've received recently ('Portrait of a Living Marsh', 'The Silvery Tay' by Keith Brockie, and 'An Artist on Migration' by Bruce Pearson) all remind me of how much the surrounding environment can add to any art, bird or otherwise. The whole world waits to be portrayed.

I wasn't really thrilled with the pencil results so decided to embellish the drawing with watercolor. That improved it somewhat but there was still something lacking. Finally I added some final modifications with gouache heightened watercolor.

The painting still lacks many things. But it was drawn from life and portrays what I saw looking out the window today. For that I'm happy. One plodding step through 24 inches of snow at a time............
Posted by Ken Januski at 5:52 PM

Thought of you two with the crazy storm. My niece in Westerly RI got slammed too. Two locals that, as you say, are usually spared. Guess Mother Nature wanted to add some interest to the record books :)

It was a lot of snow. Fortunately I had off the day before so went out and bought a lot of groceries. Then we went out again early on the morning it started. So we were pretty much set once the heavy snow arrived. All in all though it was pleasant. It's not often that we get to enjoy a REAL white Christmas!!

Oddly enough yesterday it got up into 50s as I worked on this little sketch. Some of the snow was still about 8-10 inches high. Today it is completely gone. I could no longer do a painting such as this! I guess we need to see and seize our opportunities while we have them..