Killdeer In Snow at Manayunk Canal 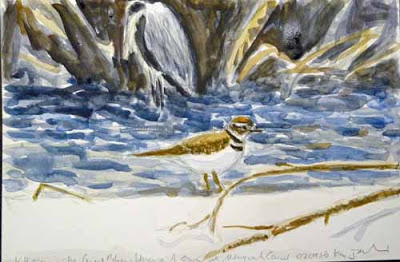 A brief bit of sun while out running errands today convinced me that I ought to try to sneak in a little birding and sketching when the errands were done. While watching a Great Blue Heron in the cold waters of the Manayunk Cnal I heard a call I didn't recoginze

Before I could figure out what it was I saw an undoubted shorebird on the spit of snow covered land in front of me. Killdeer! The first of the year. I've never seen one so early.

And yet a quick check of ebird showed that it's certainly  not the first seen in Philadelphia this year. We used to see them with some regularity on March 15. That seemed extraordinarily early. Thanks to ebird it's now much easier to see just how early birds really are.

It was too cold to sketch today. But I did take a few photos, mainly of the Klldeer. This is very loosely based on a number of those. Basically though this is composed from my imagination. And, after the length of the last post, I'll leave it at that!!.
Posted by Ken Januski at 6:45 PM