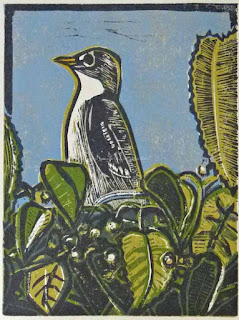 I have deliberately slowed down the number of posts I make on this blog. This began last year I think but has really become evident in 2016. It's been almost a month since I last posted. The main reason for that is that though I like to write, I'm not sure that many readers of this blog like to read. In general it seems to be a world of pictures rather than words. It sometimes seems as though words, like politicians, are considered inherently untrustworthy. So we have a major presidential candidate who thinks that mindless tweets constitute considered positions. And people like it!

I probably wouldn't have gotten distracted by this theme of words versus pictures if I hadn't wanted to use the word 'progress' in the title. That reminded me of one of my many pet peeves regarding current language use. You can just about bet that if you hear anyone use the word 'progress' as a noun today that it will be preceded by 'good.' I shudder every time I hear this. Just what other type of progress is there? Bad?! If it's bad then why not call it what it really is, regression rather than progression? It reminds me, going forward I might add, that language today seems to be used in the pastiche method of bad architecture, where you really don't understand the meaning or context of the words or architectural styles you use but you like them anyway because they have some vague feeling that is pleasurable. I was shocked recently to be watching some soccer matches on television and hear the phrase 'going forward' used in an intelligent way. The ball in fact is 'going forward' down the field of play. For most people it seems to be used as a socially acceptable bauble to encrust just about every sentence. But perhaps I should say babble rather than bauble, or perhaps both. It reminds me of some home architecture, where Greek columms are added to just about any type of home. How about some Greek columns on that yurt? It will give your home a sense of class!

I suppose it is no surprise that such totally fuzzy thought and language use should bring about a candidate like Donald Trump. He fits the time perfectly. But I should add that I don't consider this a particularly partisan issue. Democrats are just as bad in their use of spin, fuzzy language and fuzzy thought. I recently saw a Democratic U.S. senate candidate produce nothing other than verbal spin. Oddly I had just seen her conservative Republican opponent, with whom I almost always disagree, ask thoughtful questions in s Senate hearing. So who should a responsible person vote for? The spinmeister or the person who at least seems to have a working brain, even if it so often comes to conclusions with which I disagree?

In any case I decided more than a year ago that I would keep this blog more visually oriented and also visually oriented through art that I'd done not through photos that I'd taken. Above is the newest proof of my two-block woodcut of a Willow Flycatcher. It combines a reduction color woodcut with the other side of the block printed only in black on top of the color print. It's an odd way of working but one that at least so far has proven fruitful for me. Because both sides of the block can change as I go along I never really have a clear idea as to what the final print will look like. I will only know when I'm done. Because it takes time to make all the decisions for matching up two blocks and because it takes time for each layer of ink to dry before I can print over it this has been a very lengthy print. But it is nearly done. So far all of these proofs are on copier paper though I've printed all but the last color on good paper. Now I just need to print the last color on the good paper, decide on the final carving of the black block and then print it on good paper. Below are the color block so far as well as the black block so far. 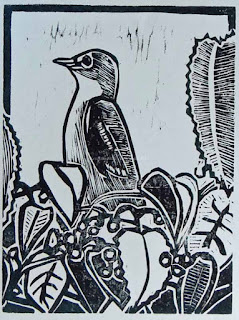 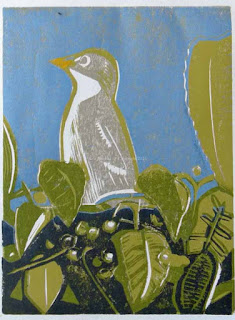