Crimes in Science and Art 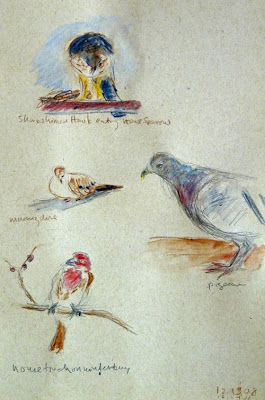 I should say right off that there's a lot of hyperbole in the title of this post. If it's too much just enjoy the sketch and move on. I suppose you could say it's a crime that the Sharp-shinned Hawk in the upper left of this sketch caught a House Sparrow and calmly tore it apart for a morning meal. Many hawk-lovers would disagree and say that hawks have as much right to eat as any one else. I won't get involved in that argument except to say that the people who say this generally tend to seem to protest a bit too much about how natural the carnage is.

But the crime I'm talking about is of a different sort: that of viewing birds anthropomorphically, or from a human perspective. I'm sure that this tendency has tended sometimes to making birds far cuter than they really are, and forcing upon them our human attributes that may be far from the attributes that a more objective observer might see. For instance seeing a mama Phoebe feeding a young bird that is almost as large or maybe even larger than her is both heartwarming (nurturing the young) and comical (the babe is bigger than the mama). Of course more knowledgeable birders realize the tragedy: she is feeding a baby cowbird, whose own parent has parasitized her nest by laying its own eggs there. She might in fact raise only cowbirds and none of her own children, not recognizing the foreign intruders for what they are. The decline of many songbirds can be attributed in part to this cowbird behavior. So humans can be wrong in their interpretation of bird behavior and other animal behavior.

Some people are so against this they almost consider it a crime. We should never attribute human motives to what seems to be analogous behavior in other species. But what else do we have? We are human. It's hard to see things in a different light or from a different perspective.

Which brings me in a very roundabout way to the title of this post and to this drawing. I've been writing a lot a here and at 100swallow's great blog The Best Artists about art that is based on a thorough mental memory of the subject. At 100swallow's site the subject has been the horse as drawn by Michelangelo and Leonardo. Here the subject has been birds. But both have talked about the need to actually observe animals in nature and draw them live. One of the main goals of this is to actually understand how the birds are put together and also how they move and act. When you understand them as thoroughly as the great artists you can probably draw them from memory, without a subject in front of you.

But another part, that I haven't mentioned as much, is empathy with what is seen. I was reminded of this when I looked at the pigeon in the lower right of this drawing. He his tilting his head in a certain way. This is a characteristic of this particular pigeon, and though all pigeons might move in a similar manner, they each are different. I had some empathy with this pigeon as I drew him. So drawing from nature can help you to understand the general structure of birds or other animals. But it can also help you to see the individuality of each bird, animal, person that you draw. In many ways this is more important and rewarding than understanding them generally. You can't really draw a good likeness of a bird without some understanding of the general structure of birds and yet I think the best art shows the individuality of whatever is portrayed, be it a house finch or a person.

I'm sure that just as some more scientific types would say it's wrong to anthropomorphize birds some artists would say it's not good to show the individuality of birds. It makes them seem cute, like drawings of babies with big, innocent eyes. But sometimes that is just what is there: the pigeon almost looks human in the way he looks out, as does the House Finch in the lower left. I'm sure some would say that is a bit of a crime. To me it's just being honest to what I see. Sentimentality is a great risk in science and in art. But absolute denial of some animal kinship with the world around us is probably far worse a crime.
Posted by Ken Januski at 3:59 PM

Since we view all creation through the lens of our humanity it would be a struggle not to anthropomorphize. As a life long birder I enjoy the aesthetic appeal of the avian form. Our house is decorated with several prints of nature scenes & birds. But somehow I've avoided attributing human characteristics to my bird friends (oops). Now those darn squirrels at my bird feeders are definitely evil!
~MadSilence

Yes you are right: Squirrels are definitely evil! They tempt you into allowing them to stick around by their playful antics. Then they eat most of the birdfood in winter. And the rest of the year they either dig up the bulbs in the garden or wait until the tulip is just about to bloom, or the eggplant is just about ready to pick and bring in for supper. Then they pounce, taking just one big bite that lops off the tulip flower or renders the eggplant unappetizing at best.

It's hard not to interpret this as truly evil human behavior. Of course we do talk about 'squirrelly behavior.' Perhaps that is an example of skiamorphism?

I guess it all just goes to confirm that it is a tangled web that we and the other species of the world create for ourselves.

Thanks for your comments MadSilence.

"..in spite of all they share in common, no bird is content to be a nonentity, an average bird amenable to all its wants and ways to measure others by. And if such a bird were invented--for the purposes, say, of a book--it would, by its very perfection, belie the essence--and much of the charm--of its race. We should be wandering in a fools' paradise from the start. Birds are not hypotheses, they are live, and not to be shorn of personality, not to be plucked from their surroundings." Also, Swedish bird artist Lars Jonsson takes pride in painting birds as unique individuals, each with its personal peculiarities of plumage, shape, behavior (and perhaps "personality" too?)

That is a really great Eric Ennion quote. Is that from the 'Drawing Birds' book by John Busby? I have the second edition of it and love it. But I don't remember that particular quote. Maybe I need to read it once again.

It was actually reading that book about 3-4 years ago that reminded me how much I used to love drawing from life, especially walking around San Francisco in the late '70s. I really think it was that book more than anything else that convinced me to start drawing and painting birds.

Lars Jonsson was one of the people that really stood out in that book as well, maybe at least partially because you could see he was looking at individual birds.

Thanks for reminding me, and other readers I hope, of some great bird artists and bird quotes. It's been a pleasure to read the Ennion quote.

Haven't had time to read your post but you page looks great! It's fun to peak in from time to time and see where you area headed :)

I added the slideshow recently. I'm debating whether or not to keep it. I don't want to slow down the page-loading so much that people abandon ship.

Now I'm off to play with my new set of Derwent watercolor pencils. I also got some for my wife so we can now fight for space in front of the window that looks out on our birdfeeders..........