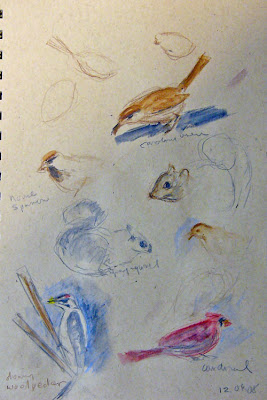 I know. I know. I said I would not publish any work until it showed a little more improvement. This sketch may not qualify. But I've been having fun with it. Last week I changed from pen and ink to pencil. I love pen and ink but it's mighty unforgiving, especially when drawing from life. Pencil allows far more deftness of touch, far more variety of line weight. I also added watercolor and waterbrushes about a week ago.

The waterbrushes are new to me and a real treat. Today I was able to add the third component: watercolor pencils. Watercolor pencils combined with waterbrushes is a great combination, just as Pam Johnson Brickell said in my earlier post about drawing birds from life. Pam, you are right. This is really enjoyable!


You get the sensitivity of pencil and the instant paint quality of watercolor with just two drawing utenstils: a waterbrush and a few watercolor pencils.
So now what had been a real struggle, requiring a great deal of no-pain-no-gain philosophizing, has become something enjoyable.

People really learn best I think when they get some reward for their efforts and not just constant failure with the promise of some faroff gain. Drawing birds from life is difficult so it's important to get some reward as you go about it. There is the reward of knowing that you're understanding what birds look like much better than you used to. But it's important to get a visual reward as well. I think that will happen, both for me and others, with this great combination of tools.

One side note: snow must be on the way. Our feeders were full of some of our more uncommon visitors such as a Ruby-Crowned Kinglet and Carolina Wren. That should make for more drawing opportunities tomorrow. And when you look forward to drawing birds from life as an "opportunity" you know that it's starting to be fun. 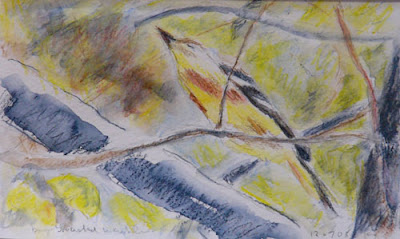 Can you tell the difference? Yes, the Bay-breasted Warbler is a based on a photo. Though we DID get snow we also got a lot of wind and there have been very few birds at the feeder. So I finally gave up on drawing from life today and decided to try the new waterbrush and watercolor pencils on a sketch based on a photo. This Bay-breated warbler was very difficult to identify when we saw him at John Heinz Wildlife Refuge in Philadelphia in late May, 2008. Only the bay swatches and strongly defined black and white wings confirmed the identification. If nothing else this illustrates the use of visual clues to identify a bird when you don't get the best look. It also illustrates the difficulty of drawing warblers from life. The numerous Bay-breasted warblers that we saw this day were constantly moving. I had to choose between just indentifying them with my binoculars, trying to draw them in the brief time I could see them, or trying to get some photos(this was the only successful one) to use for later reference. All In all it's probably best just to look at them in binoculars and t try to seal the visual memory. When working from photos there's just too much missing information. So you may be able to draw a semblance of the subject but in the back of your mind you know that you're missing something essential.

This really doesn't seem to deserve a new post. So I'm tacking it on to yesterdays.
Posted by Ken Januski at 5:16 PM

You're having Fa La La La Fun! Knew you would:) Bravo!