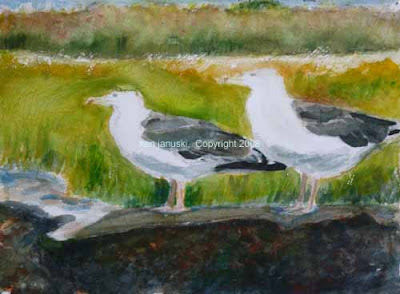 There is no doubt in my mind at all about who my favorite watercolor artist is: Winslow Homer. I couldn't say this about drawing or painting but I can about watercolor. So I was very happy to get a new Homer book for Christmas: 'Watercolors By Winslow Homer: The Color of Light' from my old haunt of the 1960s and early 1970s, the Art Institute of Chicago. While working my way through it today as I stared at some tentatively finished paintings in my studio I came across examples of his scraping and blotting to alter previously applied pigment. This is something I can use I thought.

A while later I decided to remove the staples that attached my 'Greater Blackbacked Gulls' watercolor from its stretcher board. 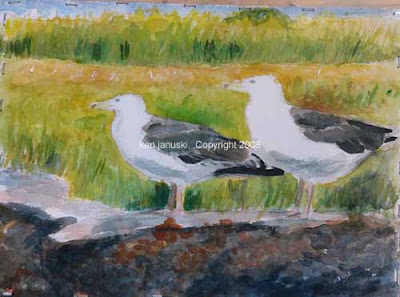 But after I had taken off a couple of staples I remembered what I'd said in an earlier post about the painting: it was really lacking in tonal variety. I'd also just read about how important tonal clarity was to Homer. As I looked at the painting I thought: What a dud!

So I went back to work on it, using scraping, blotting, erasing into wet paper, and variations on these to try to bring more tonal variety and clarity to the painting. I think that the new version is an improvement.

When I labeled this post 'Winslow Homer - Baaad Example' I of course wasn't criticizing Homer. My point is that the good example of quality art can persuade you to alter your own work, perhaps destroying it in the process. But that's really my artistic background. You work and work and work at a painting until it seems finished. For some artists this will be primarily a 'visual' finish. For others some other category/value is applied to determine finish. There have been many times where I've ruined a work by going back into it, sometimes with an idea that was brighter in my mind than when put into practice. But generally speaking you become a better artist by setting higher standards for yourself and not always settling for your first attempt at something.

But watercolor, particularly if you're new to it like I am, presents a dilemma. It's so easy to ruin the freshness of a watercolor by overwork. On the other hand Homer is a great example of ambition in watercolor. He shows you that you can go back into a watercolor and try to improve it, knowing that you may in fact ruin it, but also showing many great examples of exactly the opposite result. What a great example he sets for all watercolor artists!
Posted by Ken Januski at 3:03 PM

I like the slide show. My favorite: the Blackburnian Warbler that you use as a header on your blog. I visited your website and was surprised to find abstract art. I like the abstracted natural forms, organic & flowing, in a natural palette.
~MadSilence

I'm glad you like my Blackburnian Warbler and my abstract work. As I mentioned on the BestArtists blog recently I've always considered myself a much more accomplished abstract artist than a naturalistic one. Much of this is probably due to the fact that I spent many years working more or less fulltime on my abstract work.

I've been concentrating, parttime, on naturalistic art for the last three years now. I wish I could devote the time and focus to it that I used to do with my abstract work but it's not possible right now, not economically possible that is.

So I'm feeling my way through naturalistic art and that's been the subject of much of this blog. Sometimes I work from photos, which are more likely to offer the radical cropping that I use in the Blackburnian painting but other times I try to work from life, which I think makes for more lifelike, true and dynamic art but which not have the same design qualities as work based on photos.

I like the Blackburnian myself, which I guess is why I use it as the header photo. It's obviously not what you'd consider traditional bird art because it's so slapdash. But it also has I think the artistic expression, especially in color and shape, that I myself often try to have in my abstract art. It's probably the one naturalistic work I've done that has the expressive freedom of my abstract work.

And it's relatively old for my naturalistic work. I feel that I need to get a little better at drawing birds, or any wildlife, realistically before I take more artistic liberties. I continue to be torn between being true to what I see and using the artistic expression that is my background and that I love, but which sometimes seems to take too great liberties with its subject. Given how little respect the natural world seems to get today I've leaned toward being truer to it, at the expense of the artistic expression that I used to have in my abstract work.

I do think that as I'm able to devote more time to naturalistic art that there will be some resolution in which direction I go with it: more Blackburnians, or more sketching birds from life, or somewhere in between maybe like the Lesser Yellowlegs and Shortbilled Dowitcher charcoal drawings.