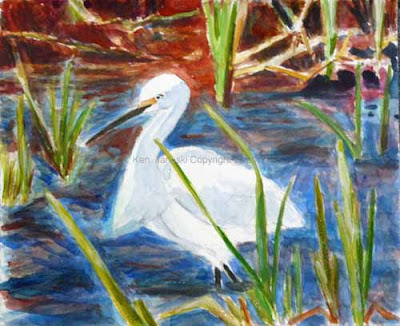 Some people will know what I mean when I talk about this and others will probably roll their eyes. The best example I can give of this is Winslow Homer. I'm rereading one of my many books on him right now and once again I notice that as I look at his watercolors chronologically that they are skilled, accomplished and then out of the blue one day, they are really exciting. That is the day he abandons opaque watercolor for transparent watercolor. Some of the paintings(for example Applepicking) he did at Houghton Farm in New York in the late 1870s before going to Cullercoats, England are good examples. He achieves brightness as though he were painting in oils, by putting the lightest colors on top. So many of the highlights are light colors laid on top of dark colors. But you can't do this in watercolors. Except you can. IF you mix some opaque white with your colors. The white is more or less a new paper background and any color on it will be brighter, not limited through transparency to any darker colors underneath. But it comes at a price. The sparkling, luminous, transparent effect of watercolor is gone.

Sometime after his return from Cullercoats, and certainly by the time of his Adirondack paintings of the late 1880s, Homer more or less abandoned opaque watercolor for transparent watercolor, regardless of cost or difficulty. The result is a body of work that sings, the watercolors for which he's most famous.

I've always disliked opacity in watercolor so I've avoided it. Until today. I just couldn't think of any other way to salvage the reeds in this painting and make them regain the foreground. The results are mixed and I might try a little more work on it. But largely it's done. I do think it looks better than yesterday but I've lost some of the brilliance that is the main reason for working in watercolor. Still it seemed worth trying, at least this once.
Posted by Ken Januski at 10:08 AM

I've been meaning to drop a note for awhile, but rainy day follows rainy day, and the spirit has flagged a little bit given the weather. I revisited your watercolor of the snowy egret with the backdrop of blue water and the greens and browns of the marsh. I imagine the sun shining on this scene, as the egret successfully stalks its prey. The sun is shining though, that is key. The warm, blue water dazzles. I feel warmer already.

I think you've read the painting perfectly. The sun is shining and the egret will successfully stalk his prey. It was a brisk but very sunny day when I took the photo that served as the inspiration for this.

I have been reading your blog and have seen how trying the constant cool rainy days have been. We've had something similar here but my guess is that it has been a good 10 degrees warmer so it hasn't been as bad as it probably is for you. We're supposed to be getting some sun over the next few days though so I hope that you'll soon be getting some soon as well. It's time for some sun!