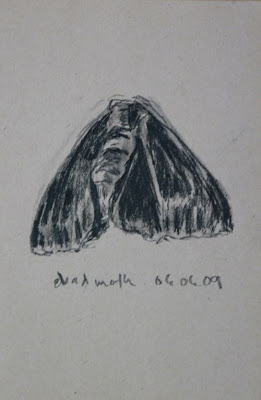 As I mentioned in my earlier post today is World Drawing Day. I'm a big believer in drawing, particularly as a alternative to photography. I won't go into the details of that here. But I did want to take advantage of this in order to force myself to do a number of drawings. It would have been nice to have ended up with some masterpieces. But by the time the morning bird census was done, and a week's worth of grocery shopping done, there wasn't all that much time left in the day.

Earlier I showed a quick watercolor pencil and waterbrush sketch of a clematis in our garden. As we returned from shopping another opportunity presented itself: a dead moth in front of our front door. At one time I did a great number of finely detailed pen and ink drawings of insects, including moths. They were done under a dissecting microscope and took quite awhile to do. Today's sketch is much quicker, done in vine and compressed charcoal and no microscope.

Sad to say I've found moths to be among the most difficult of nature's creatures to identify. After a quick glance through my moth field guide I'd say it looks a bit like a Common Fungus Moth. But I could very easily be wrong about this. 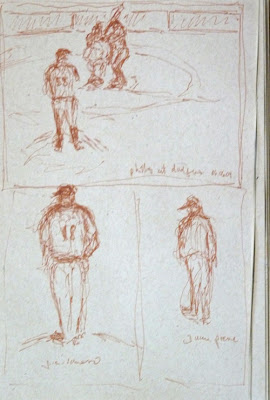 Before starting a new moth drawing though I thought I'd relax for a bit in front of the television and watch the Phillies and Dodgers. Well it wasn't exactly relaxing as it took about three more hours for the Phillies to lose to the Dodgers in the 12th inning I think. Sad to see.

But the early innings gave me a chance to try some felt tip pen drawings from TV. I first started drawing from TV many years ago during the Watergate hearings. It was TV you couldn't tear yourself away from and gave me quite an opportunity. Like that hearing baseball games are difficult in that you never know just how long the same image will stay in front of you. Most last only for a second or so. But it still can be fun to draw. This sketch shows Phillies pitcher Joe Blanton facing a Dodgers batter, I forget who. There are also a couple of other sketches of the game.

None of these are masterpieces as I said. But on this day, World Drawing Day, I hope that they at least show some of the range of possibilities that drawing offers. As this day's logo says: Drop Everything and Draw!
Posted by Ken Januski at 6:43 PM