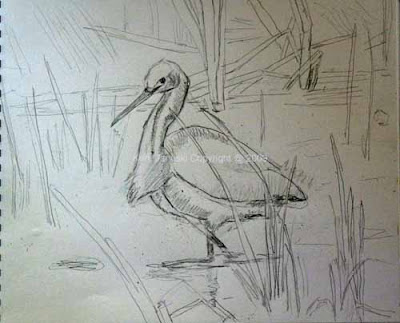 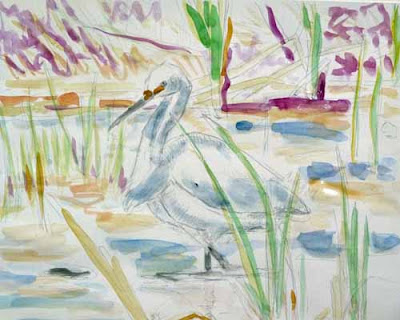 I was so happy with my Laughing Gulls watercolor of last week that I've had it in my mind ever since then that I need to return to larger, looser watercolors. Outside of the small pen and ink insect drawings that I did about 10 years ago of insects viewed under a microscope I've always worked large. That changed when I took up birds as subject matter about three years ago as I explained in my post about the gulls. Because I'm so new to birds it seemed better to start small. But that can be inhibiting and after I finished the gull painting I found that there was a freedom in that painting that reminded me of my old abstract paintings.

I also enjoyed the process of doing a sketch and then testing colors before I began the real painting as I did with the Laughing Gulls. So today I looked through the many photographs I've taken of birds over the last year and decided to try a Snowy Egret seen at 'The Meadows' at Cape May this spring. I went from 7x10 paper to 11x14. The top two photos are of the preliminary sketch. The reflections in the water looked absolutely impossible but I was happy with the water in the gull painting so I wasn't intimidated by it. 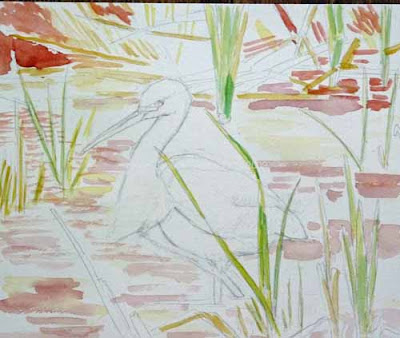 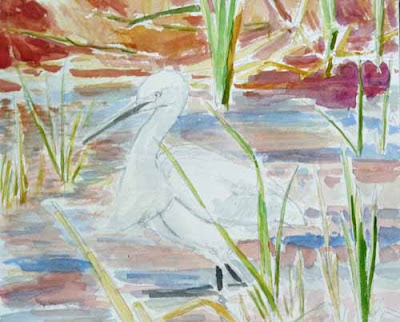 Perhaps I ahould have been intimidated by the water and its reflections though, especially as I refused to use any masking medium to save the white paper where all the reeds were in front of the water. One day I'll probably need to take up the use of a masking medium. But today I decided to take my chances without it. You can probably see the problem. As I paint the water the brush goes into the foreground reeds and distorts them, or I shy away from them and end up with an odd white space surrounding them. But I decided to work this anyway. You never know what will happen until you try it. 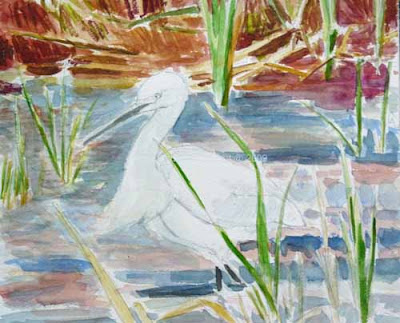 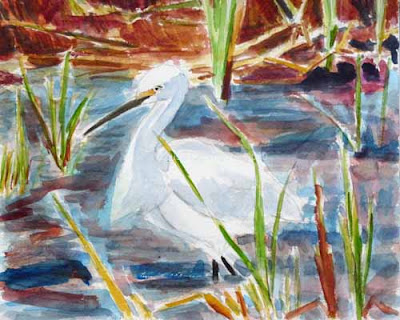 I think I'm through with this for today. It's a bit duller than it looks online. And most of the reeds are disappointing. So most likely I'll see if there's anything I can do to rescue the reeds(I doubt it) and make the colors a bit more vibrant(more likely possible I think). I did what I wanted in this painting: work in a looser method. It hasn't been completely successful. But nothing ventured, nothing gained. I suspect that I will continue to work in this fashion. I should add that I also suspect that this method will never be popular in the world of 'wildlife art.' Photographic precision seems to be more the norm there. That is fine. But I find no enjoyment in working that way. So most likely this painting is a harbinger of thimgs to come.
Posted by Ken Januski at 2:39 PM