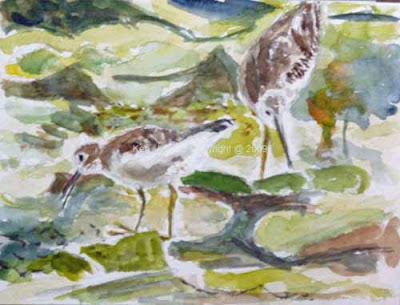 Or should it be: See, Draw, Paint, ID? These questions came to me on arrival home from a 2700 mile driving trip to the Midwest, particularly Horicon Marsh in Wisconsin and Magee Marsh in Ohio.

I think my brain wasn't fully functioning due to all the driving and much more caffeine than is usual for me. My mind was just sort of wandering after getting home Sunday night and I kept going back to one moment of the trip.

The occasion was a shorebird that I and my wife saw in the mudflats at Magee Marsh just as we were about to leave. It was very difficult to see amidst the mud and the water lilies. When we did see it, it was puzzling. Some of the markings, like the way the white of the breast curves up into the flanks and the monocolor underwings indicated Solitary Sandpiper. But the yellow-orange legs and size of bill indicated Lesser Yellowlegs. We're just starting to get familiar with shorebirds so we were constantly referring back to Sibley for help. That, along with a single call note, confused us even more. Some aspects of the bird supported each ID.

But that was just the start of the problems. There wasn't time to draw, since we needed to be getting on the road in order to reach our next hotel in Pennsylvania before dark. So we both decided to take some quick photos for later reference. Sounds easy right? Until we realized, I more than my wife, that we couldn't find the shorebird once we tried to shoot a photo! Where was he in all that variety of gray, green, brown and blue? 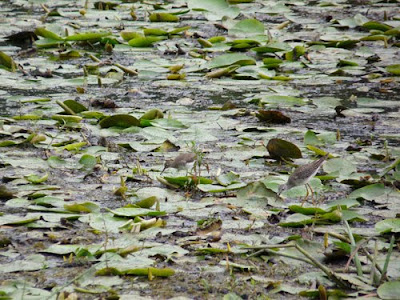 After about 15 minutes of trying to find the bird, then focus him in the camera, and shoot the photo I came to a great realization: there were two birds! They were almost identical in shape, both had eye rings, both had yellowish legs, and they were very similar in size. They even fed in a similar fashion! 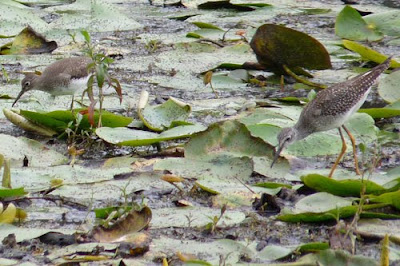 The surprise answer to the ID question was: BOTH! One was a Lesser Yellowlegs and the other was a Solitary Sandpiper. I'd seen both, thinking they were the same bird, and came up with contradictory field markings!

All of this was prelude to what I thought about that first night back home though. My thought was that I'd placed seeing and identifying the bird above all else. I could have just tried to see it, sketch it, perhaps use that as the basis for a painting, and then at some later time, maybe when titling the painting, discover what the bird(s) actually was. Someone with my artistic background might easily first see the artistic possibilities for a drawing and painting and only much later worry about an id.

I didn't and that I found interesting. To me it seemed a metaphor for what I've been trying to do in my bird art: remain true to what I see, but also make sure that the end result is artistic, not 'just' a scientific sketch. I put 'just' in quotes because I don't mean to criticize scientific sketches. They are both valuable and beautiful. It's just that I really value art, probably more than science. And yet in this case I put science first. Perhaps this is just due to the fact that we were birding first and sketching second. Still I found it interesting.

I think much bird art swings between these two extremes. For some artists correct representation of a particular bird and species is paramount. For others the bird is just an excuse for 'making art.' I don't mean to come down on one side or the other and probably am smack dab in the middle. This little episode reminded me of that. And I do find it a comfortable and enjoyable place to be!

By the way the watercolor at top is one that I whipped out this morning as an illustration for this post.
Posted by Ken Januski at 10:55 PM

Howdy! Welcome back! I'm looking forward to viewing your new work from the trip.

I read your post and had to think on it a bit. What do I do? For me it depends on the equipment I have with me. If time allows, and camera is at hand, I take a shot and then sketch - especially love sketching while viewing subject through a spotting scope :) I don't often remember to bring guide books with me on short field trips.

However, I love the game of making field notes - even if just in my head as when I see an unusual bird/wildflower while walking the dogs. I find great satisfaction perusing my guide books trying to match up what I saw/found.

Happy to be back. But also happy to be gone! Not so much gone as traveling and birding -- there's always so much to see!

I think my own methods vary as well but I was just struck, probably because I was so tired from all the driving, that my first impulse was to ID the bird(s) before doing anything else. A great tool for this is sketching and that's what I'd recommend most of the time. It really forces you to see better than anything else, camera, scope or binoculars. I probably would have done that for these mystery shorebirds if I didn't know we really needed to leave and get on with our 3 hour plus drive!