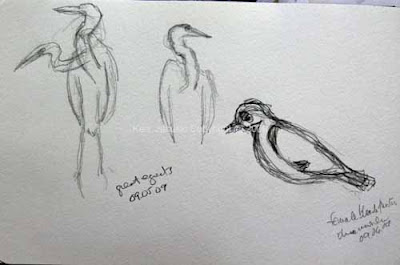 The Pennsylvania Birding List, sponsored by Audubon, helps a lot. Though I've seen very few warblers in Philadelphia recently, reports on the list show that warbler, and other migration, has been heavy throughout Pennsylvania for at least the last week. Yesterday we spent a 30 minutes hunting for the Swallow-tailed Kite that's been around for a week and then another 60 minutes birding Morris Arboretum in the late afternoon. We saw a couple of Solitary Sandpipers and a Great Egret at Morris but no warblers. So today it seemed like a good day to go to Carpenter's Woods and see what warblers might be there. 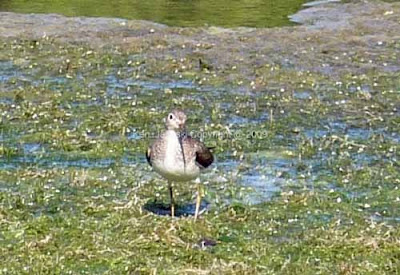 Good choice! Seven different species: Canada, Northern Parula, Common Yellowthroat, Black-throated Blue, Magnolia, Black and White, and American Redstart. Our first real look at fall warbler migration and always a pleasure! For all except the Canada we saw multiple birds. We also got a good look at a flycatcher that we finally puzzled through to be a Least Flycatcher. Two Ruby-crowned Kinglets, at least three Ruby-throated Hummingbirds and a Veery and Wood Thrush were among the other highlights. 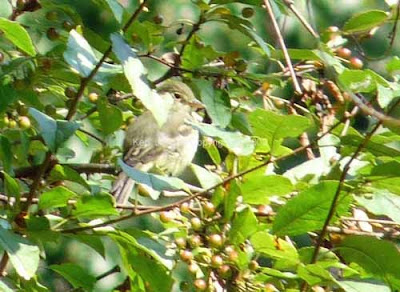 Over these two days of birding I've had my sketchbook with me, and my camera. In the long run I'll be better off just using my sketchbook. Not only is there something thrilling about drawing a bird that you know may move at any moment, you also generally get better fieldmarks so that you can confirm an ID. I immediately noticed the prominent eye-ring in the Least Flycatcher show above. But I didn't have time to try to draw it. Fortunately the photo above confirmed the eye-ring. On the other hand I remembered seeing the legs of the Solitary Sandpiper pictured above as being yellow, like a Lesser Yellowlegs. But other aspects of the bird made me think Solitary Sandpiper. When I got home and looked at the photo it confirmed, even though photos can easily lie, that the legs were dull greenish yellow. So that helped confirm that the bird was a Solitary Sandpiper not a Lesser Yellowlegs. If I'd actually sketched it I'm sure I would have noticed the real color of the legs and not needed any evidence from a camera.

I had my camera with me again today, with all the warblers, and did try one quick and failed photo of a Northern Parula. But as I looked at a fidgety female Black-throated Blue warbler I told myself I had to get out the sketchbook and try sketching it. This seemed impossible. The bird would not sit still. And I didn't have my scope, just my binoculars. That meant I needed to look through them, try to remember what I saw, and then put it down on paper.

What happened when I did this? Well a flurry of questions: how do the wings connect to the head and the tail? What about the legs? It was hopeless. The drawing at top, which includes a couple of live sketches of a Great Egret at Morris, is a composite. First I tried to draw the torso, then the head, then the tail. It is horrible!! No doubt about it. But I needed to start. And learned something. In the future I'll pay more attention to how the heads of most warblers attach to the body. I was too busy noting fieldmarks, like the spot near coverts on wing to grasp the entire structure. You really need to do that to be successful. So this is one of those drawings that is embarrassing to post. But I hope that one day I can look back at it and say: Boy I sure have improved! I remember when I put sparrow heads on warbler bodies!!

Hopefully I'll soon have the opportunity to sketch some more warblers.
Posted by Ken Januski at 4:32 PM