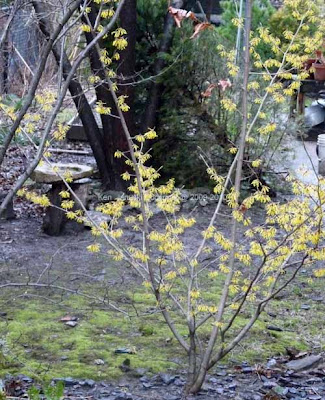 Taxes, errands, chores and rain have all put a damper (no pun intended) on getting any art done since last week. I did do a few sketches of kildeers based on last Sunday's photos but they're really not worth showing.

Nature has not stood still while I have though. Our 'Arnold Promise' witch hazel above is in full bloom. We've chosen this part of our side yard to mimic the woodsier areas of both Philadelphia, and Shenandoah National Park, where we spend so much time in spring. So a witch hazel was a natural choice. Perhaps if we'd known more when we bought this we would have gone for the native version rather than this cultivar. Maybe, maybe not. In any case it shows the graceful arching branches that are so attractive in witch hazels. And here of course it also shows its beautiful yellow flowers.

We've seen many warblers in witch hazels in our travels but we've yet to see one here. In Shenandoah National Park we saw both Blackburnian and Cerulean warblers in the same tree. But at PEEC(Pocono Center for Environmental Education) we saw a Golden-Winged warbler. It would be hard to choose between those two witch hazel experiences. But we'll take any and all of them as our first yard warbler for this witch hazel.

Along with the witch hazel are a spicebush, Trillium Grandiflorum, Blue Cohosh, Black Cohosh, Twinleaf, other trilliums, Goldenseal, Hepatica, and a few other plants so common to areas like Shenandoah. Many of them can also be found in the Wissahickon, just a short half-mile from our house. Slowly we've added them to our small yard. It really seems like spring when they begin so shoot up from the soil, or go into full bloom like the witch hazel. 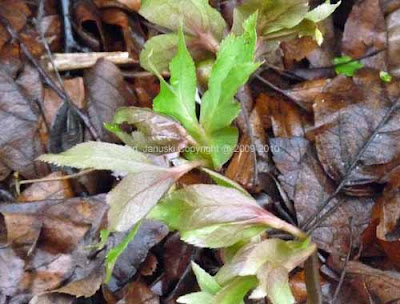 The hellebore above is in the same area. The first flower is just starting to unfurl at center left. These we actually have never seen in the wild but that's probably because we're just not out early enough in the season. Perhaps they're always blooming when I'm stuck inside with taxes. 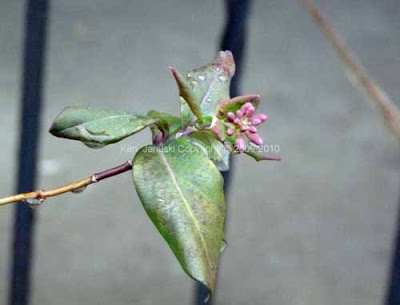 In both of our small front and back yards we grow an American honeysuckle, I believe 'Alabama Crimson'. It was a real surprise to see the flower buds on the one in the front yard. They seem like such a summer flower, especially with their rich crimson color and their hummingbird visitors. But in my experience they also flower early. Still it's a shock to see these buds here already. Our spring flowers are just starting to poke their head out of the ground and yet this summer flower is almost ready to bloom! 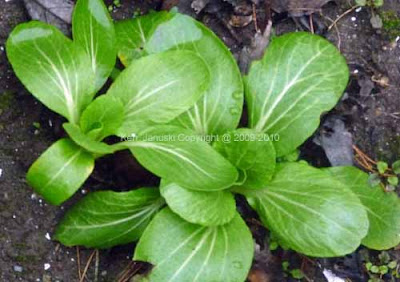 If you're a gardener, as both of us are, of course it is not just flowers that bring excitement to early spring. So do vegetable and herbs, in fact any sign that dormancy is done and vigorous vegetal life is here again. Above is a choi that survived our cold frame and the broken glass that's been on top of it along with four feet of snow for the past few weeks. Two of the three cold frame windows broke under the weight of all that snow. And yet our plants survived and look great. This is a choi, I think 'Bonsai' maybe from Johnny's Selected Seeds.

It seems a fitting reward for the hours spent today on the computer doing taxes: seeing the first, infectiously optimistic, signs of spring!