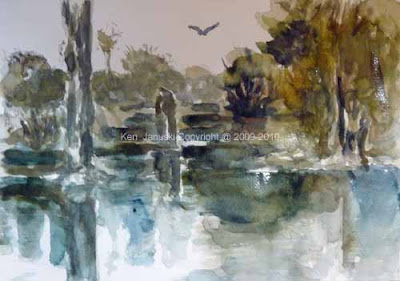 And that's what happened to us. Just as were ending a quick trip to Morris Arboretum in search of migrants like Eastern Phoebes a mature Bald Eagle lifted up from down low, either from the pond at the wetlands or from the teeny Papermill Run.

It was so sudden and unexpected that I got neither drawing, photo, nor visual memory. But I did want to commemorate it visually. So this is based on a combination of two photos: one of the pond at Morris taken the same day, and one from a low flying mature Bald Eagle seen at Crane Creek in Ohio last September.

As a test of the theory that all watercolor, or at least most of it, can be done with just one good quality large brush, this is all done with a size 8.
Posted by Ken Januski at 10:03 AM

I like the art - glad you are enjoying the Morris Arboretum!

I'm glad that someone from Morris read this and saw that you had a Bald Eagle visit last Saturday.

I and my wife greatly enjoy Morris. When we first started going many years ago we never went to the wetlands but we've been regular visitors to that area in particular over the last five or more years.

It really is amazing the number of birds that frequent the Arboretum, especially the wetlands area. In fact it's easy for us not to see the trees for the birds! But we still love the trees and shrubs as much as we always did!