Where Are You, Little Bud? 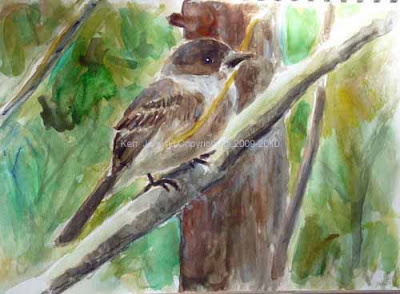 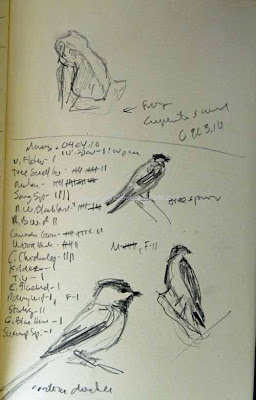 Well it was nice to see the Bald Eagle last week while out looking for our first Eastern Phoebe of 2010 but eight days later and we still haven't seen a Phoebe. Jerene thought she heard one yesterday at Carpenter's Woods but I didn't hear it and neither of us saw it. Today we spent the late morning at Morris Arboretum, for one of the most beautiful Easters in years, but neither saw nor heard any Eastern Phoebes.

Where are they? I'm sure we'll see one soon, I guess when we've given up on them and are looking for wood warblers instead! The quick watercolor above, one I'm not really thrilled with, is based on a photo of a Phoebe seen in Illinois a few years ago as it gathered material for its nest.

Included above are a couple of quick field sketches of one frog, a Carolina Chickadee and a Tree Sparrow. I'm not really happy with them either but they're the start of the season. They should get better with time. AND, they're a learning experience. As usual the birds did not sit still. So I tried to get a mental image and then get it down on paper. Only when I got home and looked at some photos I took did I realize that the eye of the Carolina Chickadee is within the black cap, not below it in the white part of the face. I modified my sketch to show this. But the important thing is that I'd never even thought of the location of a Chickadee's eye before.

That's why I say that field sketching more than anything else shows you what you don't know. But that is incredibly valuable. You only learn when you realize your ignorance. I suppose this could sound depressing. But I'd rather know what I don't know so I can learn more than go around blithefully ignorant.
Posted by Ken Januski at 4:49 PM

Ahhhh, it's all in the voyage :) Enjoy spring!

Happy Spring. Finally heard a couple Esstern Phoebes yesterday but for some reason they kept hidden from me. Normally their constant flight and twitching tail make them easy to see. I had to content myself with the first Northern Rough-winged Swallow of the spring. I always love to see their exhuberant flight!