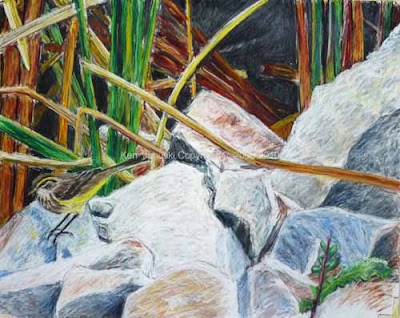 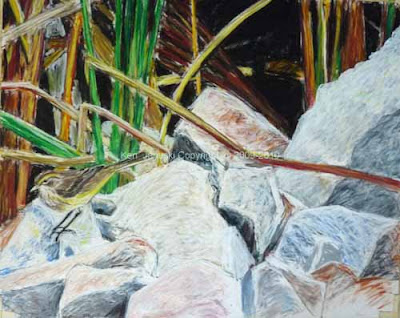 I confess that this is a somewhat self-serving post. I'm putting up this version of the Palm Warbler drawing so that I can see it online. I could also do so by just looking at it on the computer. But I prefer to put it on the blog, along with some explanation. Some artists look at their painting in a mirror. I used to sneak up on mine. I'd go away and come back in the room and see how it hit me just as I peaked in the door.

You might think this seems silly or unbelievable. But I think it's safe to say many artists don't really know what they're doing. They have to do it, sneak up on it, and then see if it gives them a clue as to how to proceed. Authors talk about their characters taking over the plot and determining where it will go. The same is true in art. So putting this online may give me a clue as to what to do next.

I have always been struck by the brilliant white of the limestone on Dike Road at Horicon Marsh, especially in conjunction with the background reeds. The new reeds are green and maroon with bits of yellow and orange. The old dead reeds are a pale ochre. But then as you look back into them you see the richest dark. It would make Velazquez, Goya and Manet jealous.

Add to this scene one elegant Palm Warbler and you can see, I hope, why I chose to draw it. But there are extreme color contrasts: the cool white of the rocks, the deep rich reds, oranges, greens and black of the reeds. And then the sublty colored dun-browns of the warbler. How you put them all together in one painting?

Well that was the challenge here and I haven't solved it. I thought adding some color to the limestone might help. But if it has it's surely not enough to do the trick. Past experience tells me the answer will be simplification. It often is in art. You go back and forth, round and round, and finally you simplify. We shall see.

This is a more ambitious drawing than many of mine. But it may seem like a less successful drawing. The warbler is secondary at best. But that is fine with me. Birds exist in a world, not in isolation. I'm not a big fan of bird portraits. I prefer them in their environment. And though I've never been a great fan of Robert Bateman I am impressed by his desire to show the environment in which his subjects live. (And of course I'm impressed by his devotion to saving the environment from the many thousands of people who are all to happy to destroy it and everything in it.To me birds aren't trophies to be put up on pedestals. They're real creatures in a real world. And this is a real scene, the only modification being the addition of the wild lettuce. It did show up in other photos I took of same scene so it was nearby.

My guess it that this may not be my most popular art. But I do think it is one of my best works of the last year.
Posted by Ken Januski at 3:40 PM

Beautiful! And I love your written description of the colors you saw.

My problem with putting my art online is that I like it better on screen! It then looks a bit lackluster when I look back at the original.

The appearance of online art always reminds me of an experience I had in San Francisco over 25 years ago. I happened to go into one of the tourist galleries at Fisherman's Wharf. A salesman was showing off a landscape, in the Rembrandt manner, with a small house or hut. It wasn't bad. Then he went up to it and turned on a switch and a light behind it illuminated the entire painting in a golden glow. Then he told the customers that "our philosophy is that if you like it you should own it."

Well I had to leave after the juxtaposition of 'philosophy' and paintings that you turn on. It was too much.

But he did have a point in a way. That light from behind really made the painting shine. And that's what happens with most online work. The light comes from behind it and makes it look far more brilliant than it really is.

So then you or I go back to the real work and it looks a bit dull. But online can't capture the texture or the size or some other things so I guess it's an even trade off. Still I know what you mean. There are times when the real work looks a bit disappointing...:-(

I stopped by again and saw your addition. Really nice!

I happen to like the placement of the bird in its environment. This is often how I spot a bird - I'll be admiring something else and out of the corner of my eye I'll see movement. For me, this painting captures a moment that I frequently encounter in nature. Plus as I said before, I love the colors you've chosen.

Thanks again Gabrielle. I think you see it pretty much the way I do. I had to decide whether or not to submit it for the big Birds In Art show. It really hasn't been popular at birdforum. I ended up submitting it, along with the pastel of the Great-crested Flycatcher. I always think it's best to trust your own instincts in something like this.