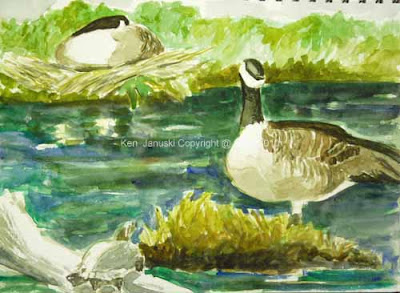 I know that Canada Geese are not the favorite bird of most people, and I understand why. But we've been seeing a lot of them recently, most on nest but one with goslings. It's odd that we've never run into so many on nest before. I don't know if we just didn't happen to be at these areas at the same time of year, were just oblivious to them or what. Especially at Morris Arboretum wetlands we keep running into pairs of them, with one on nest, as we walk around the pond. Seeing them and their breeding behavior up close has given me a new appreciation for them.

Yesterday at the suggestion of some artists at birdforum, particularly Sid Frissell and Nick Derry, I did a quick painting based on two of my sketches from earlier this week at Morris: one a Canada Goose on nest, the other a turtle sunning himself on a log. I then added a third Canada Goose from a photo I'd taken there a few weeks ago.

This is a small, quick watercolor, more of a study than anything else. I could have tried some preliminary sketches first but I wanted to just try it out in paint. Now that it's done I can see that if I were to do a finished painting I'd change the composition a bit. I'd probably not let the water get so dark, and I'd put a little more color in the turtle and have the browns of foreground hummock not so closely match the browns of the foreground Canada Goose.

That's the nice thing about such quick paintings. They allow you to think out loud. With a more flexible medium, like oil, I could just make the changes on the same painting. But watercolor turns to mud when overworked. So most of the time the changes that need to be made have to be made in a new painting. And that's fine. I think this tends to make me more carefree and adventurous in these paintings.
Posted by Ken Januski at 11:02 AM