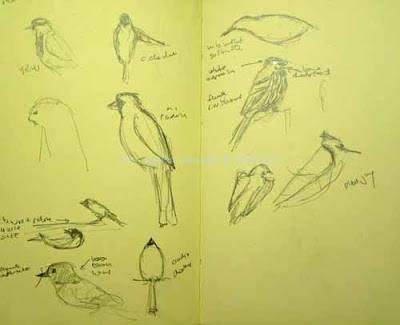 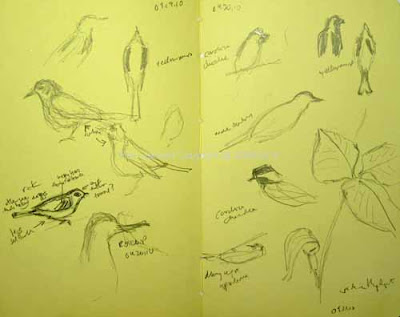 Spring has finally arrived here, though not yet with a vengeance, at least as far as migrants and returning breeders go. I've seen a few warblers, both Yellow-rumps and Palms, and I've seen one Eastern Phoebe and heard three or four. Eastern Towhees are conspicuous and there are many dueling birds, for mates and territory I'd guess. But still I just haven't see all that many birds yet.

I'm well aware of this because I've been out for 3-4 hours each of the last three days, birding and sketching. I'm determined that this is the year when I'll become an accomplished field sketcher. As you can see I have a very, long way to go!

But you have to start somewhere and one place is to reach for the sketchbook rather than the camera. That's what I've done the last few days. First the sketchbook, then maybe the camera, if I want to remember something like the wing bars of a Ruby-crowned Kinglet or the facial markings of a Blue Jay.

Part of the pleasure of field sketching I think is similar to swimming. It's easy to say: I can't do it; that's impossible; or something similar. But once you take the plunge you find out it's not so bad and it can become addictive.

One moment that expresses that today was a scene of a Red-bellied Woodpecker hanging upside down on a limb a few feet away from a right-side-up Robin. I've sketched that in just a few quick lines here. I don't think I could ever get that with a photo. And though it doesn't look like much it still could become the seed of a painting. The ability to draw this type of actual encounter in nature is part of the reason it can become addictive I think.

I was out for 6 hours today, in two different locations. I ended up at a blind with feeders in front of it at Schuylkill Center for Environmental Education. I have to confess by that time I did only a few sketches, e.g. the Blue Jay here, and then resorted to a camera to end the day. Eventually I hope to do a more finished drawing of the female Red-winged Blackbird which I've sketched here. But I also have some photos for details.