We spent about 3 hours at Morris Arboretum wetlands again today, hoping to see some migrants. Though it was supposed to only get to 59 at least it was supposed to be sunny. The sun should make it seem much warmer. Well it might have if the clouds hadn't been so thick. But as it was it stayed both cloudy and cool.

Many Canada Geese were on nest and then as we came on what must have been about the fifth couple they let out particularly loud squawks. Then I saw why. They had 6-7 goslings. What was most amazing is that they seemed to be tinged in a light lime green. I did a quick watercolor of them at top from some photos I took. 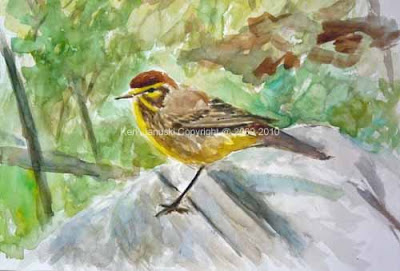 And finally we saw our first warblers, palms. The first was far way and not very satisfying but the second landed in front of us full of his golden wash. They are always such a pleasure to see in spring. In celebration of the first warbler of 2010 I did this quick watercolor and gouache based on an old photo. I'm not happy with it but I'm just showing it as an illustration not a work of art.

Too busy to write much else today. But I did want to post these two watercolors of birds that we saw.
Posted by Ken Januski at 7:28 PM

Yes it is that time of year, when almost every day can be a lovely day, as long as it's not pouring rain. I can hardly keep myself inside and doing artwork these days because there's so much going on outside!