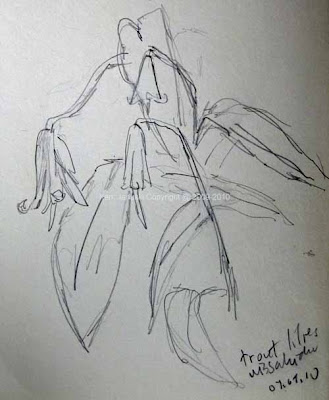 I always fear, though not too much, that I lose readers when I veer off into art theory. I do like art theory, in fact I have a fondness for theory about all sorts of subjects, but sometimes it just seems like mumbo-jumbo. I see eyes glaze over as I rattle on. So I keep my distance from it most of the time. Sometimes it just seems too indulgent and abstract.

So............back to something more straightforward. Last Sunday Jerene and I spent 4 1/2 hours walking the trails of the nearby Schuylkill Center for Environmental Education. 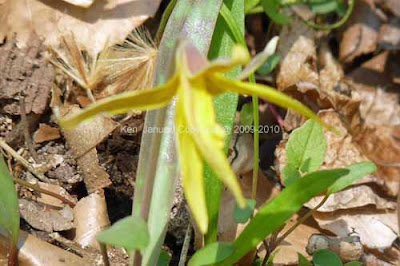 Our hope was to find our first Palm Warbler of the season but we knew that we might not. We did expect to find plenty of other birds, and certainly wildflowers. At top is a sketch I did of some fading Trout Lilies on Forbidden Drive at the Wissahickon last Friday. Immediately above is a photo of one seen at SCEE on Sunday. There were thousands and thousands of them, though not really very many in bloom. I assume that many are too young to flower. But the ones that were in flower seemed to be just starting rather than just ending as at the Wissahickon. Not to immediately go back to theory but here's a question: which do you prefer, the sketch or the photo? Photos really can show you detail that you could never get down in a drawing. And yet I always prefer sketches.

I'll get back to some other wildflowers that we saw but first I'd like to mention the title: Mystrees and such. The reason is below. 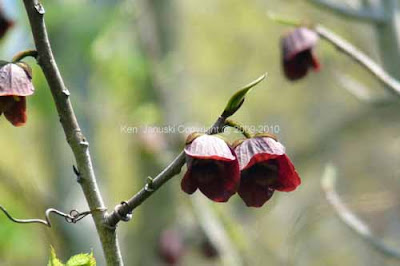 What in the world is this? The light maroon flowers were on a multistemmed tree that rose 20-25 feet in the air? They remind me of flowers from the hibiscus family, but I don't know of a tree in that family. And I really haven't had much time to look. I took a quick look through David Sibley's Guide To Trees, but didn't find anything on my quick perusal. However it's not organized by key as some guides are. So you really can't look for maroon flowers. We have a guide that does use such keys but I just haven't had time to look at it. Maybe tomorrow. Until then I leave it to readers.

OK, you readers were slow on the draw here. Once I finished all the paperwork I had due today, both tax and otherwise I took out my 'The Tree Identification Book' by George W.D. Symonds. Sure enough I went to flowers and found it. Since the book is not in color I then searched the web to make sure. These are the flowers of the Pawpaw. I highly recommend this book and well as his book on shrubs. An additional note. According to wikipedia the Pawpaw has the largest edible fruit indigenous to the North American Continent. 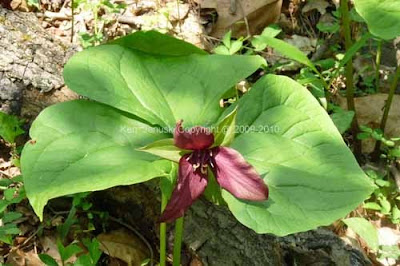 The trillium above was almost the exact same color as the mystery tree. And it too is a mystery. There's no doubt it's a trillium, but which of the various red trilliums? I might have time to investigate tomorrow. But for now it's another one for readers to identify.

We never did find our Palm Warbler. In fact we still haven't seen our first warbler of 2010. But we did see our first Osprey, Brown Thrasher and Hermit Thrush of 2010. They all reminded us that the orderly procession of the natural calendar marches on. Its regularity is a comfort in an often chaotic world. I seem to always see Palm Warblers down among the full Mayapples. I didn't take any photos of the Mayapples. 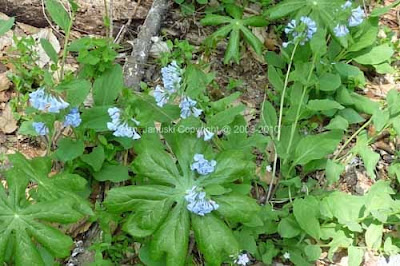 But I did take one of these Bluebells. We often see Palm Warblers near them at SCEE. Hopefully one of the next sketches I show will be based on Palm Warblers and bluebells. I just need those Palms to finally show up! And sad to say I see I'm up to white lies again: some Mayapples snuck into the Bluebells photo!
Posted by Ken Januski at 10:25 PM

I, for one, enjoy when you veer off into art theory! But I'm also a sucker for wildflowers. Have you been to Bowman's Hill Wildflower Preserve just south of New Hope, PA? If not, you need to go, and soon! The spring ephemerals should be in peak bloom about now.

You beat me to the punch on the pawpaw. It is in the custard-apple family and one of the few members of that family not found in the tropics. (Bowman's Hill has some growing in their Penn's Woods section.)

However, I can say that I am pretty confident that your trillium in question is a purple trillium or wakerobin (Trillium erectum). I don't know if you got close enough to the bloom to tell, but they sometimes have a putrid smell and for good reason; they are pollinated by flies.

I think the only wildflower blooming here in the northern Rockies so far this season is our native buttercup. So enjoy all of your wildflowers for me!

It's nice to know that at least someone enjoys it when I veer off in that direction. I tend to forget that there generally is a reader or two for each of the various directions that I take. Some people say that a blog should stay on one subject. But I prefer to just write what I'm interested in and hope I don't lose too many readers along the way.

It's funny I was just saying to my wife that we ought to get up to Bowman's Hill soon, both for the wildflowers and the birds. I remember seeing many Magnolia warblers there one year and I keep thinking back to that and what a drawing opportunity it might be. I know that we've bought some plants from them, including our Golden Ragwort, one of my favorite wildflowers. We always see it when we go to Shenandoah in the spring. Hopefully I can either take a photo or do a painting of our own in the backyard this spring.

Thanks for your thoughts on the trillium. I get confused because we occasionally buy more unusual ones bred at the local Henry Foundation for Botanical Research. So we've had a number of various red ones at times like Vasey's I think. So then I get confused when I see one in the wild. I think you are right though that this is a WakeRobin.

We've slowly accumulated wildflowers in a 6 foot stretch of our garden over the years. So we always see some: Twinleaf is up but not blooming yet as is Bellwort. I think the Goldenseal are about to bloom. And Catesby's Trillium looks like it might bloom. We've never seen it bloom before. Hope this whets your appetite for your own wildfloers.