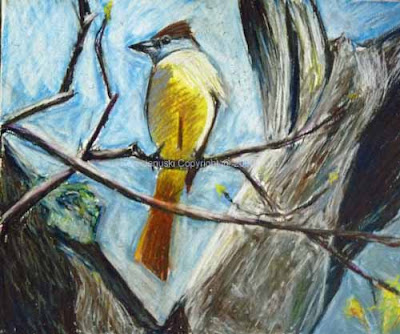 I haven't had any time to do any artwork over the last week. But I did have an interesting week reading the first two books published on artist Robert Bateman. I've never looked at him closely, but what I have seen I haven't liked much. I know that this is probably considered sacrilege in wildlife art circles.

But I have to say that I'm glad I read the two books. I have a new appreciation for him. That appreciation had begun with an essay by him on the Wildlife Art Journal (the site is a pay site but some samples are available for free). The essay is called, as I recall, something like 'Why I Am a 21st-century Conservative.' I found myself thoroughly in agreement with him in terms of how neo-conservatives have absolutely corrupted the notion of 'conservation', natural, social and cultural. I was so impressed by it that I wanted to give him another look.

It has been a pleasure. For one thing the reproductions are richer than those I'd seen elsewhere. In particular the color is much richer. And the design stands out more. Also Bateman talks about how he's not happy when people praise his skill in portraying detail. That's not really all that important to him. This was a surprise because if I'd had to sum up his work previous to reading these books I would have said: too much detail, rendered in too-muted colors. So it was a pleasant surprise to see that though he does care about detail that is only part of his motivation.

I don't want to go on anymore about him here. Perhaps in another post. In any case seeing how important design was to him reminded me of my Great-crested Flycatcher still on the back burner, waiting for a more developed rendering than my last quick watercolor.

I've had these photos for a couple of years and just couldn't figure out how to do a painting or drawing based on them. Today I did a few more design experiments in color and then finally went with something fairly similar to what I used a couple of weeks ago. It is amazing to me how much time I spent on trying to figure out a design that I liked. This was the only one that showed promise.

There is definitely more work to do here. But it's off to a solid start. I suppose I could still ruin it. But since I haven't posted anything in awhile I wanted to post it, half-done though it is.
Posted by Ken Januski at 6:51 PM

Oh funny! Robert Bateman is one of my favorite wildlife artists so your post gave me a chuckle. One of the things that was a real eye-opener for me was his use of abstract painting in his seemingly very realistic paintings. If you look at the snow on his distant mountains, etc., it is all abstracts. I believe that he studied abstract painting in school. I also see a lot of Andrew Wyeth's influence in his work. And, his commitment to conservation IS remarkable.

Your flycatcher is looking really great, Ken. Love the strong light and also all the energy that your pastel strokes give the piece.

I've always felt odd not liking Bateman since so many people consider him one of the best, if not the best, living wildlife artist. So I was happily surprised to see that there was more to him than I thought. And I do think the more colorful reproductions helped too.

One other thing that made me like him: he said he preferred Rembrandt's drawings to his paintings. I've always felt that way too. I think the other thing for me is that my taste, as you can probably easily tell, does not run to highly detailed work. So that made it harder for me to like him. But when I see the color, design and attempt to portray all of an environment in his work then I can appreciate all of that and not get lost in the detail.

And of course you have to admire him for his commitment to conservation as you say!

I'm not crazy about Rembrandt's paintings either. But there was an exhibit at our university's art gallery of Rembrandt's etchings of street characters. They were tiny and so exquisite. Wonderful stuff.

One of my new favorite contemporary bird artists is Ewoud de Groot. I love his compositions and the combination of realistic but painterly birds with abstract backgrounds. I look forward to hearing what you think of his work! http://www.ewoudbirds.com/Welcome.html

Yes I think Rembrandt's etchings are wonderful as well. He's just such a tremendous draftsman and can capture so much in just a few lines when he wants to. It's been awhile since I've picked up one of my books on him and flipped through it but this may prompt me to do so. Every time I start writing about artists I realize that I could spend most of my day looking at their art work, and I'd enjoy it. But then I wouldn't get my own work done. So they end up on the back burner a bit until I do a long stretch of book looking.

I've seen a few of de Groot's paintings in reproduction but never in person. I did like the sense of light in them as I recall. I'll need to take another look now. I may be wrong but I seem to recall he used to be something else: maybe a professional fisherman or professional outdoor guide? Of course people like that often understand nature well and you can see the desire to put it down on canvas!