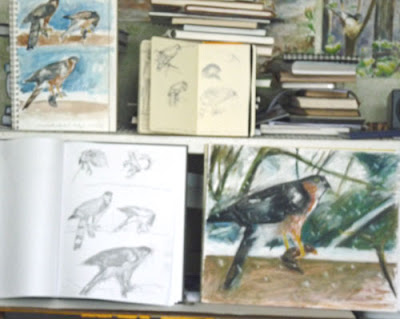 I'm not big on landmark dates and it's only by accident that I realized that it's just about the second anniversary of this blog. It will be almost for awhile because I started in on February 29, 2008. There will be no 02.29 this year. Or next.

So I guess that it's today or nothing. When I began this I thought that it would be more writing than art, and would probably be more about birds and nature than about art. But I knew that I wanted art in the title because it would inevitably make an appearance.

I was happy to discover that there are a wealth of people writing well about both birds and nature on the web. Many of them have more experience, more passion, more interest than I do. I have all of them just not so much as many others. And I also realized I didn't like much of the bird and wildlife art I saw on the web. Maybe I could do some wildlife art that I liked. Since I've spent far more of my life with art than with nature the blog has headed off in that direction.

Birds and nature are still the subject of the art but art itself has gained prominence. I'm happy with that. It's where my talents lie.

I'm including one photo here. It's a synopsis of the last two posts, various studies and the finished drawing that came about from seeing the Cooper's Hawk on Friday. It shows to an extent how I work: try one medium, then maybe another, maybe back to the first, until eventually I feel like I've portrayed the subject in the way that I want.

A year ago I probably would have tried one medium or two at best for a particular subject. Now I'll thry three or four. In time I might add oil paint. But I think this is the way art works best. You keep trying until you get it the way you want. Part of this is that I'm devoting more time to art. Much of this I'm sure is due to the fine example set by the artists of the Wildlife Art section of birdforum.net. Seeing such high quality work on a daily basis has been a great stimulus.

And I'm sure that part of it too is due to my readers. I never really thought much about them/you when I started this. But I have enjoyed all the readers, both the anonymous ones whose name I'll never know as well as those who comment with some regularity. An artists toughest and most important critic is always himself. But it's nice to know that there are some other people enjoying what he or she does as well.
Posted by Ken Januski at 1:53 PM