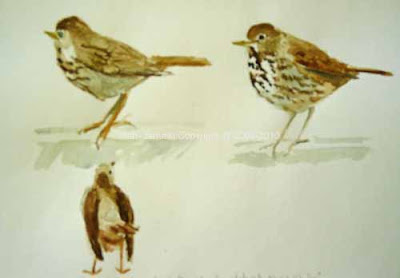 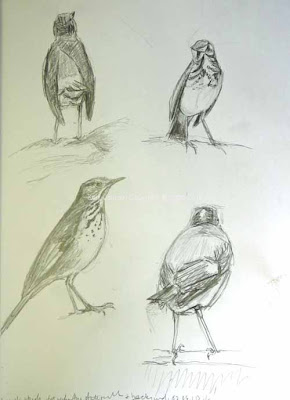 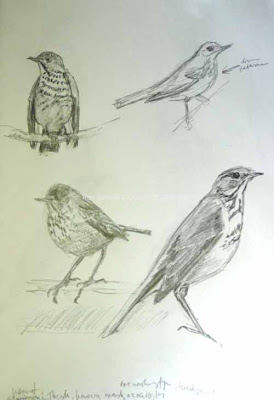 The area in which I live has a long history of hermits. Streets are named Hermit. The name came from a German Pietist group that settled along the Wissahickon Creek, a frequent subject of this blog, in the late 1600s.

But the hermits I'm talking about are Hermit Thrushes, the only thrush, outside of robins, that is possible to be seen at this time of year in this area. We don't see them often in winter here but have occasionally. However they are often one of the first birds of spring. We saw a number of them last April and I posted about it here.

I did a few very quick sketches last April but this weekend I wanted to do some more detailed studies. So the accompanying photos show two sketchbook pages and one watercolor sketch. They include birds seen at Fort Washington State Park and in our backyard on the same day last April. There is also one seen at Horicon Marsh last fall.

One of the problems with photos is that they don't always show the whole bird, or as in these they show such an odd perspective that it's hard to completely understand the structure of the bird. So at the top right of one page you see me copying a Hermit Thrush from the most recent edition of Roger Tory Peterson's 'Field Guide to the Birds of North America.'

My purpose in these, as in my doodles on Mozart's birthday, is both to get a better understanding of the subject, and to let my imagination work in the background thinking about a more finished work. I didn't come up with any ideas but I'm sure I will at some time.

You can probably see that some of these sketches are just off. I could have cropped the photos to just show the good sections. But I think it's more useful to show everything. Art is always a process that includes many mistakes. I've never seen any purpose in hiding mistakes, unless your work is mainly mistakes. In that case it might be best to hold off for a bit. (After I wrote the last sentence I realized that someone might take it as a really harsh criticism: if you're not successful yet give up and try something new. I guess I should have put a smiley after it. In any case I really don't think anyone would keep going if they didn't have some successes at least in their own mind. Without the feeling of at least partial accomplishment I don't think anyone continues to pursue something - art or otherwise.!) But who would continue on if they only had mistakes and failures? We don't keep on without success.

One of the successes of these pages I think is showing the way that the Hermit Thrush slowly raises its tail then lowers it oh so slowly back down. it is a diagnostic movement among the thrushes. When it does so the wings stand out as extraordinarily long. It's a striking pose and I've shown it both as a sketch and as a watercolor. When you see this, especially if the tail is redder than the rest of the body, you know that you're seeing a Hermit Thrush.
Posted by Ken Januski at 9:36 AM